I was discharged from the military the week of September 11, 2001. I filled out my separation documents literally within a stone's throw of the smoldering Pentagon. I was sure someone was going to take one look at my paperwork and tear it into pieces. Part of me hoped they would. But I was never asked to stay on. Not much need in the middle of the Afghan desert for a guy trained to track submarines. Still, when I peeled off my flightsuit for the last time, I placed it in a box that I kept close at hand for the next several years. Being recalled to service, despite the fulfillment of my contract, was a very real possibility.

In Stop-Loss, it is a reality that Army Sergeant Brandon King (Ryan Phillippe) knows all too well. After two combat tours, one in Afghanistan and another on the killing streets of Baghdad, the decorated squad leader returns home to Texas. Haunted by the friends he's led to gory deaths and the civilians who have inadvertently fallen into his crosshairs, King, who is due to get out, wants nothing more than to retreat to the sanctuary of his parents' ranch and begin purging the bile of the past several years from his life.

But home is far from the respite that soldiers like King expect. No matter where in the world they go, they cannot get away from their own memories. Shattered by post-traumatic stress disorder (PTSD), King and his fellow soldiers find adjusting to stateside life impossible. Likewise, their families no longer recognize the boys they sent off to war. The soldiers' wives and lovers can no longer relate to men who live teetering on the edge of profound brutality and who, like Lady MacBeth, cannot seem to wash the ever-present blood from their hands. Iraq, for all of its carnage, made sense; home is a land of foreign customs and alien peoples.

Everything comes to a head for King when, based on a contractual loophole, he is ordered back to the front lines. The controversial technicality, which prohibits servicemen and women from getting out of the military once their required term of service is complete if their loss is deemed too grave to America's war effort, is known euphemistically as the "Back Door Draft" or, more officially, "Stop Loss." It is estimated to have affected more than 100,000 men and women in uniform.

Disillusioned and betrayed, King tries to fight the verdict and when that fails, makes the rash decision to go AWOL. Questioning his ties to home, family and the friends that define him, King flees rather than return. But as warrants for his arrest are issued and the Army closes in, King must decide whether he will spend a lifetime on the run or turn and face an unjust bureaucratic juggernaut he cannot possibly defeat.

Stop-Loss is the first film in almost a decade from director Kimberly Peirce, whose first film was the powerful, Academy Award-winning Boys Don't Cry. With a dearth of female talent behind the camera in Hollywood, her absence has been both inexplicable and regrettable. That her return is marred by one-dimensional characters, soapbox sermonizing, a muddled plot and exaggerated melodrama is all the more unfortunate.

The nature of the stop-loss policy forces every man and woman in uniform to walk a fine line between doing their duty and doing what's right. Don't question it and you look like a patsy. Resist it and you look like a coward. Stop-Loss has a single, powerful scene (the remainder are uninspired derivatives of the original) in which King wrestles with the true meaning of personal honor and integrity while attempting to verbalize the film's central tenet: any policy that goes back on its word in such a capricious manner is guilty of violating that most sacred trust between a nation and those warriors who have pledged to protect it.

Michele (Abbie Cornish) and Brandon have a drink

It is almost impossible for films of this nature to not stray into soapbox preachiness. But Stop-Loss isn't written well enough to imbibe nuance and subtlety. It rages against the machine in mostly artificial feeling staccato bursts, and is not quite sure what to do with the remainder of its time. Stop-Loss is a drama that exists at the margins of plausibility. While it begins and ends well, the majority of the film goes for action when it should rely on the inherent drama of its story. Unfortunately, it does not have a muscular enough script to fall back on and resorts instead to bar fights, back alley brawls and fisticuffs to keep its audience engaged. Things fall apart far too fast for the returning veterans; the film compresses a lifetime of PTSD into the span of a few evenings.

Most of the action takes place in rural Texas, which, more often than not, doesn't look much better than bombed out, bullet-riddled Baghdad. This dilapidated duality creates an effective mirroring between the breakdown of both locations and its peoples. Setting the action in small town America (President Bush's home state no less) gives Stop-Loss a greater feel of authentic, salt-of-the-earth Americana that could not be achieved in a more urban environment. We no longer throw ticker tape parades in big cities unless it's for triumphantly returning sports "heroes."

Stop-Loss gets most of the military stuff right, creating an authentic feel to the camaraderie between this band of brothers. For all its faults, Stop-Loss manages to criticize the war and its commander-in-chief (one particularly insolent line directed at the President elicited thunderous applause from the Washington D.C. audience with whom I saw the film) while honoring the bravery and sacrifice of its veterans. Perhaps the most moving scene in the film takes place in a VA hospital for those soldiers whose bodies have been decimated by combat. Stop-Loss understands that you can be against a war while also completely for the troops fighting it. 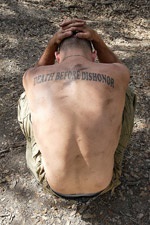 The film delivers some powerful images of PTSD

That Stop-Loss is topical goes without saying. Not that anyone wants to see it. If the past cinematic year has proven anything, it's that audiences are not interested in watching films that wrestle with the unpopularity of this country's involvement in Iraq. Like dominoes, one after another, last year's "war on terror" themed films—In the Valley of Elah, Rendition, The Kingdom, Grace is Gone, Redacted, Lions for Lambs—fell to audience apathy. The majority of Americans appear to be so repulsed by this war that they cannot imagine engaging it in the form of entertainment.

In America's last unpopular war, audiences flocked to see such films as Apocalypse Now, Platoon, Full Metal Jacket and The Deer Hunter, though those films had the advantage of being produced years after armed conflict had ceased. Is it too soon to begin examining the consequences of our role in Iraq, or should we, as we did for Vietnam, wait a while to let the festering wounds heal before using the lens of art of interpret our feelings?

Whatever your feelings on the subject, Stop-Loss doesn't help matters. While its almost exclusively liberal-minded audience may already be a foregone conclusion, it sabotages its own vital premise by couching its argument in a thin, theatrical story. Stop-Loss should have been a thought-provoking drama that pushed audiences to question their government's treatment of its most precious "blood and treasure." Instead, this crucial subject is lost amidst melodrama and mediocrity.

Stop-Loss is rated R for graphic violence and pervasive language. The film begins in Iraq with a blood-drenched, urban firefight whose violence ripples throughout the rest of the film. As one might expect, the film's language matches the ferocity of its violence. An earlier reported scene of "strong sexuality" has been removed from the final cut.