Maria Sue Chapman, Steven Curtis Chapman's youngest daughter, died Wednesday evening from injuries sustained when a sports utility vehicle hit her in the driveway of the family's home near Franklin, Tennessee. She was 5. 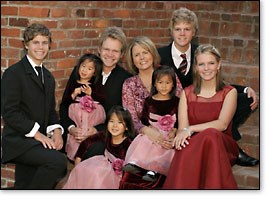 A recent photo of the Chapman family with Steven holding Maria

The girl was struck by a Toyota Land Cruiser driven by one of her teenage brothers around 5:30 p.m., authorities said. The teen's identity was not released.

Laura McPherson, a spokesperson for the Tennessee Highway Patrol, told The Tennessean that the girl was airlifted to Vanderbilt Children's Hospital in Nashville, where she was pronounced dead.

"It appears to be a terrible accident," McPherson said, adding that no charges are expected.

According to the Associated Press, several family members witnessed the accident, but the Tennessean report said only two children saw what happened. McPherson said the entire family was home at the time.

"I'm confident I can speak for everyone in the community to say we will do everything we can to support this family, as we would do at any time, but especially at a time like this," Gospel Music Association President John W. Styll told The Tennessean.

Their belief in adoption led the couple to found Shaohannah's Hope in 2000, an organization aimed at helping families facing the financial burden of adopting a child. So far, the charity has assisted thousands of families with grants, according to the nonprofit's Web site.

"My heart is just aching for them," said Velvet Kelm, Chapman's publicist.

"I don't know of anybody who loves his children more than he does and is so committed to the adoption concept, and to lose one, no matter what the circumstances, is heartbreaking beyond all comprehension," Styll said.

In April, Chapman was inducted in the Music City Walk of Fame for more the 20 years in Christian music — a career that has spawned five Grammy awards, 54 Dove awards, 44 No. 1 singles, and more than 10 million albums sold.

"There may or may not be issues ahead for us," Mary Beth Chapman told Today's Christian in 2005 about her and her husband's future as adoptive parents. "But even if Shaoey turns 16 and says, 'I hate you, I'm going back to China,' I know God put Shaoey in our lives; God put Stevey Joy here, and God put Maria here. Whether it's all peaches-and-cream or it's miserable, this is God's work."

Editor's Note: Steven Curtis Chapman's music has touched millions over the last 20 years, and many of us feel like we've come to know him and his family through his songs and through his consistent witness for Christ. Most can only imagine what the Chapman family is going through right now in the aftermath of such tragedy. The 'who,' 'what,' and 'how' of all this is undoubtedly weighing heavily on their hearts, leading them to wonder 'why' such a thing could happen.

As brothers and sisters in Christ, I would encourage you to keep the Chapman family in your prayers as they wrestle with the grief and the guilt stemming from little Maria Sue's accident. Pray especially that they would experience God's peace and comfort at this extremely difficult time.

Steven Curtis Chapman's official site is overflowing with traffic from those wishing to express their sympathies. If you'd like to show additional support, consider making a donation to Shaohannah's Hope, the family's foundation promoting the care of orphans from around the world. You can make a donation to the Maria Fund in memory of Maria Chapman by clicking here, or mailing donations to Shaohannah's Hope, c/o The Maria Fund, PO Box 647, Franklin TN, 37065. What better way to remember Maria Sue's life than helping to provide a life for others like herself?

A recent photo of the Chapman family with Steven holding Maria