We often hear about the conflicts and tensions between Israelis and Palestinians, but how often do we hear about the conflicts and tensions within the Israeli community itself? Adam Hootnick's documentary Unsettled is a remarkably focused, yet diverse, look at several young Israelis who find themselves on different sides of a recent and very controversial issue: Israel's unilateral withdrawal from the Gaza Strip and the evacuation of the Jews there, accompanied by the demolition of their homes.

The withdrawal took place in 2005, five years after the Second Intifada began sending a steady stream of suicide bombers into Israeli communities, and there are occasional nods within the film to the violence that has become part-and-parcel of Israeli life. Lior, a lifeguard on the Gaza Strip's "Palm Beach," is happy to point out that life in the Gaza Strip is not just about people shooting each other: look at all the hot young Israelis who go surfing, sit around campfires and play Beach Boys songs on their guitars. But in the middle of one interview, a loud noise is heard in the distance, and the filmmakers asks if that was an attack. Yeah, shrugs Lior, that was a mortar shell. "It's normal," he says. "It's the reality, we surf in the morning and eat bombs in the night."

Lior's breezy beach-bum attitude is nicely offset by his friend Meir, who has a more religious sort of attachment to the land. While Lior and his parents, who have lived in the area for 20 years, have pretty much resigned themselves to the fact that the government is compelling them to leave their home and move somewhere else, Meir points to passages in the Bible where God promised the land to the Israelites and instructed them not to give the land away to their neighbors. "We can make peace with [the Palestinians]," he says, "but not on the borders of Israel." However, while Meir might seem more serious than Lior, his thinking about these issues does not run much deeper; asked how disagreements between the Jewish and Muslim scriptures ought to be handled, Meir simply replies that he does not believe in the Koran—or the Muslims' "Torah," as he puts it—because the rabbis told him it is not true. And that's that.

A more earnest sort of fight against the withdrawal is put up by Neta, a 20-year-old protestor who makes short films in an effort to convince her fellow Israelis that the withdrawal is not only a bad idea politically but disobedience against God. She complains that the people who made the decision to evacuate the Gaza Strip—a decision that was supported by a majority of the Israeli population—simply don't know what it's like to live there, so how can they presume to know what's best for that community?

Then there is Ye'ela, a 21-year-old activist on the other side of the fence, who lost a sister to a suicide bomber some years ago and now complains that people living in the Gaza Strip—a territory the Israelis have occupied since the Six-Day War in 1967—have no right to ask the armed forces to protect them when they arguably shouldn't be living there in the first place. The problem, says Ye'ela, is the religious people who think only of themselves, and not about the soldiers who die for them.

And finally, there are the soldiers themselves. The film focuses on two, a man named Yuval and a woman named Tamar. Tamar is seen training for the mission, where it is assumed that many settlers will have to be carried out of their homes against their will, and some may even put up a fight. Yuval, meanwhile, takes the filmmakers home to meet his mother, and we learn that, when he signed up for his compulsory military service, his mother had the legal right to prevent him from joining one of the combat units, because he is an only child. So now, instead of defending the land from foreign enemies, Yuval must force his fellow Jews to leave their homes. 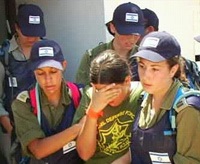 Two things are conspicuously absent from the film, though hinted at from time to time. One is the political debate that led to the decision to withdraw from the Strip in the first place. We can hear echoes of that debate in the various protests and political stances taken during the film, but the decision itself has already been made and everybody knows it; the film is concerned not with the policy debate itself but how various people react to the implementation of that policy. The other is the Palestinian population, which is talked about but stays so far in the background that, at the moment, I can't even recall if it is ever depicted in the first place.

The film's focus is ultimately on the Jews themselves, and how the withdrawal from Gaza profoundly affected some people's understanding of what it means to be an Israeli. What lingers in the memory are the settlers who loudly denounce the Israeli soldiers—one calling the evacuation a "Holocaust" and giving the soldiers a "Heil Hitler!", another tearfully proclaiming that she buried her grandson in the Gaza Strip and demanding that the women in uniform share her grief—as well as the deeply moving displays of, and appeals to, religious and ethnic solidarity in the midst of potential conflict. Soldiers and settlers share hugs and tears around one man's Torah scroll, and it is striking, to say the least, how soldiers entering a house to forcibly remove its residents, with plans to destroy the house down the road, still feel compelled to venerate the mezuzah (a piece of scripture placed on Jewish doorposts in accordance with Deuteronomy 6:9) on their way in through the door.

Unsettled does not offer a complete picture of the Israeli-Palestinian situation, nor does it pretend to. What it does do is open a window into an aspect of that situation that might not have occurred to many of us. And while it offers no easy answers, it raises all sorts of messy but important questions—and it does so by immersing the viewer in the personal experiences of others in a most compassionate way.

Unsettled is not rated by the MPAA, but would probably be PG or PG-13. It includes loud arguments and images of soldiers forcibly removing people from their homes, as well as news footage of the aftermath of terrorist attacks, but no direct depictions of violence. A couple of four-letter words are also spoken.

1 of 3
LiorNetaTamar (right) evicts a settler