The Father of Faith-Based Diplomacy

Doug Johnston is going where few foreign policy experts have gone before.
Rob MollSeptember 19, 2008
This article is from the September 2008 issue. Subscribers can read all of CT's digital archives.

In Pakistan's North West Frontier Province, on the border with Afghanistan where many believe Osama bin Laden is hiding with local support, Douglas Johnston walked into one of the most infamous of the region's madrassahs. In the West, media had identified the religious school as being linked to the 7/7 London bombing.

"The situation was tense," Johnston recalls. Israel was fighting Hezbollah in Lebanon. Because of U.S. support for the war and its invasions in Iraq and Afghanistan, Americans were not considered friends. Leaders of the madrassah warned Johnston to say nothing provocative. But as the youngest ever to qualify for the command of a nuclear submarine, Johnston is accustomed to tense situations.

Johnston introduced himself and two other Americans as followers of Jesus, saying they were committed to his reconciling work. But Johnston didn't proceed with feel-good statements about different faiths getting along—though he believes Christian and Muslim scriptures enjoin mutual respect. Instead, he challenged his hostile audience. Johnston said Muslims are to respect other faiths because, as Muhammad had taught, God himself created people separately to compete in good works. In order to be good Muslims, Johnston said in effect, they must hear him out.

The audience, which likely included members of the Taliban, listened as Johnston then quoted Jesus' command to turn the other cheek. As followers of Allah, Johnston said, they must also be followers of Jesus, considered to be a prophet. And because Jesus said to turn the other cheek, these Muslims should follow Jesus' example and not launch unprovoked attacks on those they consider enemies.

Despite the school's links to terrorism, the audience warmed to Johnston's rebuke. ...

The Father of Faith-Based Diplomacy

The Father of Faith-Based Diplomacy
expand
hide this 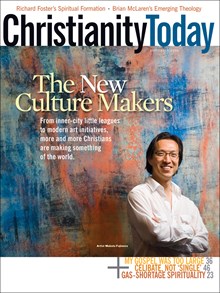 This article is from the September 2008 print issue. Subscribe to continue reading.