The resurgence of the cinematic western genre may have hit its peak last year (3:10 to Yuma, No Country for Old Men, There Will Be Blood), but it is clearly not gone yet, as evidenced by Appaloosa, a western in every sense of the word.

Adapted from the 2005 novel by crime-fiction writer Robert B. Parker, Appaloosa weaves a pretty standard yarn about the Wild West—specifically the wilds of a town called Appaloosa in the "New Mexico Territory, 1882." This town is in desperate need of some serious law-keeping, so the lily-livered civic leaders employ the services of Virgil Cole (Ed Harris, who also directs the film) and wingman Everett Hitch (Viggo Mortensen) to save the day. The hired hands are a pair of self-described "peacemakers" who roam western landscapes looking for some freelance mercenary law-keeping. They are no-nonsense and capable—entrusted by the townspeople to protect them from shady characters, especially Randall Bragg, a rancher bully with designs on controlling the town and everything in it.

Upon settling in Appaloosa as the paid lawmakers/sheriffs, Virgil and Everett immediately befriend a wayfaring woman, Ms. French (Renee Zellweger), who comes to the town from who knows where, with who knows what on her mind. She and Virgil pair off in no time, while Everett looks on with dubious eyes. Virgil, who has previously only had relationships with prostitutes and "that one Apache woman," is smitten with Ms. French for simple enough reasons: "she speaks well, chews her food nice, and cooks good." He doesn't seem to mind that Ms. French turns out to be a total player—propositioning most of the men in town, including Virgil's closest friend, Everett.

Alas, the primary romance in this movie is not ... 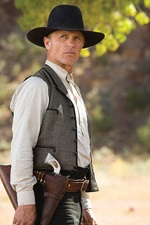