Spike Lee's attempt at a sweeping war epic, Miracle at St. Anna, opens with an aging World War II vet watching the D-Day classic The Longest Day starring John Wayne. As the movie shows white face after white face, the African-American man grimaces and says, "We fought for this country, too."

I'm not sure if Lee used the word bad there to signify a lack of quality or quantity, but while his film is wholly dedicated to proclaiming the contributions of the black G.I., it doesn't do much for the quality of this genre. The movie is plagued by an inconsistent tone, scattered focus, cheesy self-indulgence, and irrationally sporadic scenes and characters that aren't believable. The movie wants to have big things to say, but flawed, unfocused storytelling gets in the way.

Miracle at St. Anna, written by James McBride, is based on McBride's book of the same name. This tale of historical fiction is inspired by the Sant'Anna di Stazzema massacre of August 1944 where German SS troops brutally slaughtered 560 Italians—mianly women, children, and old men—in retaliaition to partisan activity in the area.

The film, like the book, is only very loosely based on the tragic event. In fact, it takes up less than 10 minutes of the very long film and only serves to set the story arc for two characters. To be sure, this film is not about the historical events in Italy of 1944, but instead is created ... 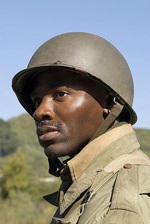