The Seventy-Sevens were "pretty much inactive and out to pasture" for several years when drummer Bruce Spencer suddenly called guitarist and lead singer Mike Roe to say the group should record an album of early blues and gospel music. At the time, Spencer was backing up Jackie Greene, a rising star in the Americana scene, and had fallen in love with genre. The call sent Roe on a quest to find classic songs, bringing the band into the studio to hammer out Holy Ghost Building in a relatively short time. The album has earned positive critical reviews, proving that this classic Christian rock band is not done just yet. We interviewed Roe while the band's founding member was on his way from Sacramento to take in the tastes and aromas of the Garlic Festival in Gilroy, California.

How did you collect and decide which songs you were going to include?

Mike Roe I dug into my own collection and borrowed albums from some friends. They were records from the 1920's onward, blues and gospel stuff. In those days the line wasn't that clearly drawn between the two. I learned a lot by doing some research on some of these people. Eventually we grabbed some hillbilly stuff and some songs from the folk scene. I tried to get together as many songs as I could that said something to me or spoke to me in some way, and then put them on cassette. When it came time to record, I brought the cassette to the studio, hit play and said, "What about this one?" As soon as we heard a tune we liked, we stopped the tape, walked over to our instruments, and told the engineer to roll tape. Usually within 20 or 30 minutes, maybe an hour, we were done. There was no rehearsal, no arranging. Everything was just completely spontaneous and off the cuff, which is the way ... 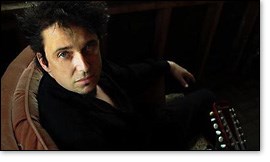