If you are nostalgic for Woodstock this summer and feel the need to see a movie about it, your best bet is to get your hands on Michael Wadleigh's Woodstock (1970), the definitive historical documentary about the legendary 1969 music festival, and one of the best concert documentaries ever made. In the shadow of the comprehensive Woodstock, Ang Lee's new drama, Taking Woodstock, is merely a whimsical little footnote. But it's a well made, engaging little footnote—and one that any history buff or child of the counterculture will likely enjoy.

Adapted from the book Taking Woodstock: A True Story of a Riot, a Concert, and a Life by Elliot Tiber and Tom Monte, the film is essentially the telling of the Woodstock story through the eyes of one young man—Elliot (Demetri Martin)—who plays a tangential but important role in the whole undertaking. It's a true coming-of-age story set against the backdrop of one of the most iconic events of the 20th century. 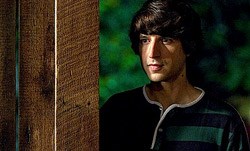 In the summer of '69, Elliot is helping his Jewish parents (played by Imelda Staunton and Henry Goodman) run their struggling Catskills motel, the El Monaco, in the upstate New York town of White Lake. Elliot is the president of the White Lake chamber of commerce, which allows him the authority to sign permit requests for things like music festivals. When Elliot gets word that a major music and arts festival has lost its permit in the neighboring town, he steps in and helps arrange for the festival to come to his town. Several phone calls and meetings ensue with festival promoter Michael Lang (Jonathan Groff), whose staff takes up residence in the El Monaco as they frantically try to organize what promises to be a massive event. Among Elliot's key contributions to bringing about Woodstock is his help in finding the perfect location for the event—the 600-acred dairy farm owned and operated by Max Yasgur (Eugene Levy). Soon the wheels are turning and the stage is being built, and hippies from all over the country are pouring into White Lake to be a part of "3 Days of Peace and Music."

But as much as this film is a "behind-the-scenes" look at how Woodstock was planned and carried out, it is also a tale of one young man, Elliot, and the things he discovered about himself, his family, and the world during the crazy days of August 15-18, 1969. The film is largely about his rocky relationship with his parents, his journey of sexual discovery (the film strongly indicates, though never says explicitly, that Elliot is gay), and his emerging existential assertiveness as he begins to take control over his own life and choices. 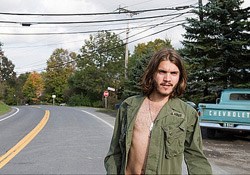 Elliot's journey isn't terribly unique, of course. Of the 500,000-plus young people who made the pilgrimage to Woodstock that weekend, certainly there were many others in similar places of self-discovery. The film's focus on Elliot indicates that director Lee and writer James Schamus (Brokeback Mountain) believe his story to be representative of the broader youth movement of the time—the universal story of a disenfranchised, spiritually confused counterculture that was at odds with the post-war ideals of their parents' generation. These kids were at Woodstock not just to hear music, but to glory in the massive company of their peers and compatriots and experience the world as they would have it be: peaceful, fun, trippy, loving, and free of the impersonal machinery of the bureaucratic, technocratic, soul-deadening military industrial complex.

For the most part, Lee does a nice job capturing the unique spirit and excitement of Woodstock. Utilizing the same sort of split-screen-heavy '70s aesthetic that Wadleigh used in his film, Lee and his team manage to cover most of the bases of the experience. From acid trips in Volkswagon hippie vans to mud-sliding games, fringe theater performances and coed skinny-dipping, Taking Woodstock depicts the extravagant hedonism that characterized the event. The attention to period detail in things like costumes, props, and manners of speaking (i.e. hippie slang like "pig," "ball," "fuzz," etc.) is especially commendable. There are a few magnificent tracking shots that survey a whole parade (literally) of hippie humanity as they make their way down jam-packed state highways to get to the festival. From bra-burning feminists and commune-dwelling hippies to Vietnam vets and Students for a Democratic Society (SDS) activists, everyone is there. The only thing noticeably absent in the film is any actual concert footage from the legendary performances of people like Jimmy Hendrix, Joan Baez, Richie Havens, and Janis Joplin. For that footage, you'll have to check out the Wadleigh film. 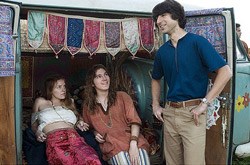 Though it is full of interesting historical tidbits and has occasional compelling drama, at the end of the day, Taking Woodstock doesn't feel entirely satisfying. The narrative of Elliot and his family is interesting but under-developed, and many of the supporting actors (like Emile Hirsch as Billy, the jumpy Vietnam vet and childhood friend of Elliot, or Liev Schreiber as a cross-dressing vamp) come across as mere caricatures to fill out the diverse roster of "Woodstock types." Demetri Martin is fine in the lead role, though it's a far cry from his much-beloved personality on his Comedy Central show, Important Things With Demetri Martin. Imelda Staunton is entertaining as a crotchety Jewish mother and money-grubbing immigrant, though her performance also borders on caricature at times. This is just not a movie that lends itself to tour-de-force acting performances or intimate character revelations. The character of Woodstock is too big and overpowering to be anything but the top bill.

Taking Woodstock is not Ang Lee's first foray into this period of American culture. His domestic drama The Ice Storm was set in 1973 suburban Connecticut and also explored questions of family and shifting cultural values in America. But where Lee describes that film as "the hangover of 1969," he describes Taking Woodstock as "the beautiful night before and the last moments of innocence." 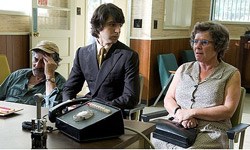 In the end, Taking Woodstock is mostly just a love letter to a bygone era, a tribute to Woodstock and all that it represented as the apex of '60s idealism and countercultural hope. Woodstock was the last deep breath of the hippie movement—a peaceful celebration of the flowery utopian dream that so many youngsters shared. The summer of '69 saw humanity at its best (the landing on the moon) and its worst (the Manson family killings), and Woodstock ended the summer on a hopeful if precariously extravagant note. Less than four months later, the violent, disastrous Altamont Free Music Festival in California ("Woodstock West") would strike the deathblow to '60s hippie idealism and close the book on an era.

Taking Woodstock ends on a mountain of trash and the cleanup after the crowds clear out, with a nod in the direction of Altamont to underscore Lee's "last moments of innocence" theme. It's a slightly sobering place to end—imbued with a decidedly "morning after" solicitude—but perhaps it is appropriate. For all the iconic importance of Woodstock, it really was just three days of drug-addled partying. And parties—even the biggest of them—always come to an end.

Taking Woodstock is rated R for graphic nudity, some sexual content, drug use, and language. The subject of Woodstock really can't be filmed truthfully without all sorts of scandalous activities being portrayed, from copious amounts of drug taking to people in various states of undress (and lots of totally naked people, dancing and swimming and just walking around). And there's a lot of nudity in this film.