In Deep Church, Jim Belcher says it doesn't have to be either-or.
Brandon O'BrienDecember 14, 2009
Our Rating
not rated
Book Title
Deep Church: A Third Way Beyond Emerging and Traditional
Author
Jim Belcher
Publisher
IVP Books
Release Date
September 7, 2009
Pages
233
Price
$15.93
This article is from the December 2009 issue. Subscribers can read all of CT's digital archives.

In the mid 1990s, Jim Belcher and his wife began hosting Sunday evening meetings for a few friends hungry for intimate Christian fellowship. They wanted more than they were getting from traditional church; they wanted to wrestle with difficult issues and be rigorously honest about their struggles. "Over the next year," Belcher writes, "hope began to return. People were being set free …. Lives were changed forever."

About that time, Belcher became connected with young ministers all over the country who were experiencing the same discontent with the traditional church and were beginning conversations about the future of ministry. As compelling as he found these conversations (ones that would come to define the "emerging church"), he also felt what he calls "Calvinist misgivings" about the movement's core and direction.

Deep Church: A Third Way Beyond Emerging and Traditional (InterVarsity Press) is Belcher's effort to find middle ground between these two increasingly antagonistic groups of Christians.

Now the senior pastor of a conservative Presbyterian church in California, Belcher writes as an insider and outsider of both groups. In the first part of his book, he introduces the reader to the emerging church, which he identifies as essentially a protest movement against the traditional church's "captivity to Enlightenment rationalism," "narrow view of salvation," and "weak ecclesiology." He clarifies that the emerging movement is anything but a unified group, but comprises at least three major branches. Belcher concludes the section with a vision for "deep church"—an effort to reconcile emerging and traditional Christians.

In part two, Belcher addresses issues that divide emerging and traditional Christians, such ...

Emerging vs. Traditional
expand
hide this 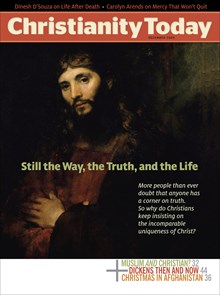 This article is from the December 2009 print issue. Subscribe to continue reading.