Pedro Almodóvar, an impeccable director of emotionally sincere films, stumbles here with a muddled, largely uninteresting story of a blind filmmaker with a painful past.
Brandon Fibbs| December 18, 2009
Our Rating

The sexual melodrama Broken Embraces is like an onion; Spanish director Pedro Almodóvar has given the film many layers to peel through, but there's not much left in the middle. Instead, it's a cornucopia of insightful ideas and homages to other films, none of which find a way to cohere into anything articulate or meaningful. This, Almodóvar's longest film, is also his least compelling.

Once upon a time Mateo Blanco (Lluís Homar) was a famous director, beloved in his native Spain for his penetrating and absorbing films. Then a terrible car accident left him blind. Out of the tragedy, Harry Caine was born, once a playful pseudonym the director used when evading the paparazzi, now an alternate persona within which to hide from the past. Though Harry's mind was unharmed in the crash, he is the victim of amnesia all the same, self-imposed though it may be. The memory of that unspeakable night is too wrenching to bear; Harry lost far more than his sight in the crumpled shell of steel and glass.

Harry still makes the most of life (and the beautiful women he encounters), and is a screenwriter thanks to the work that gets funneled his way from his former production assistant Judit (Blanca Portillo) and her son Diego (Tamar Novas), who transcribes his words. During one of their stints together, a series of events transpire that drive Diego to ask Harry about the time before the accident, fourteen years earlier. To his astonishment, Harry relents and weaves a tale of jealous business tycoon Ernesto Martel (José Luis Gómez), his cuckolding mistress Lena (Penelope Cruz), his gay son (Rubén Ochandiano), and the one man who stumbled into their lives and bore witness to its absolute collapse: Mateo Blanco. 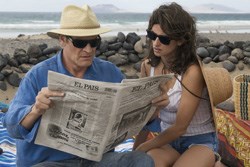