There's only one thing you can be sure of after leaving The Imaginarium of Doctor Parnassus, and it's this: Tom Waits makes an excellent devil.

The wild, wooly, fanciful tale takes place somewhere between the glorious imagination of Doctor Parnassus—which can be strangely manipulated by the entrant's own imagination—and the dingy, crass modern London underbelly. Perhaps most notable as Heath Ledger's final film (he died in New York in January 2008 following the first round of shooting), Imaginarium manages, impressively, to seamlessly blend Ledger's performance with the three actors who stepped in to finish the role: Johnny Depp, Jude Law, and Colin Farrell. If Ledger's ghost didn't hang so heavily over the film, you probably would never know that Gilliam didn't plan it that way, which may simply be a testament to his frenzied imagination.

Speaking of Gilliam: he's had a rough go of it lately, not having made a good movie in a decade. This is an improvement on that record. There's a lot of the more hallucinatorily imaginative Gilliam here (with elements that echo previous work all the way back to Monty Python), a fact that will please the devoted but confuse the uninitiated. Imaginarium is a crazy (at times disorientingly so) trip through reality, dream, and nightmare, with an old-fashioned dash of a battle for souls.

Doctor Parnassus's Imaginarium is a traveling show, consisting of the Doctor himself (Christopher Plummer), his sidekick Percy (Verne Troyer, aka "Mini-Me"), a boy he rescued from the streets named Anton (Andrew Garfield), and his beautiful almost-sixteen-year-old daughter, Valentina (Lily Cole). They are a motley anachronism, dressed in colorful rags, traveling in a gypsy wagon, stopping outside nightclubs ... 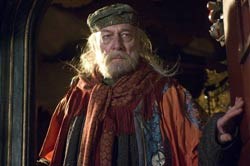