Kirk Jones, writer/director of Everybody's Fine, hopes his new film will inspire families to have more realistic expectations of one another.
Ruth Moon| December 3, 2009

If everyone in your immediate family suddenly backed out of a planned family celebration, would you breathe a sigh of relief and put the sweatpants back on, or set out on a cross-country venture to track them down?

In Everybody's Fine, opening this weekend, Frank Goode (played by Robert DeNiro) decides on the road trip. When his four grown children all cancel their plans to visit him for a cookout weekend, Frank decides to travel the country to see them at work. His wife, who recently died, told him the children have jobs in advertising, music, and art, but Frank wants to see for himself. Over the course of the film, Frank realizes his children's positions aren't quite as prestigious as he had imagined, but he—and they—slowly realize that position titles and paycheck sizes aren't, after all, what matters.

Kirk Jones, writer and director of the film, hopes Everybody's Fine works as an antidote to the ideal of the American dream that many parents transmit to their children. Jones, a British filmmaker who also wrote and directed 1998's Waking Ned Devine, has three sons of his own, aged 3, 14, and 18, and although he has not reached the empty-nesting stage of Frank in the movie, his insights from parenting helped shape the film. CT Movies spoke with Jones about film directing and the importance of family.

What drew you to this movie as a director?

I have three children myself and was able to relate to it from the start. Being in a family is a universal theme, second probably to the theme of love, which seems to be responsible for most of the films and music and books that we listen to and read. All of us are in a family at some level. It suddenly dawned on me that everyone can relate to the dynamics of family, of the ... 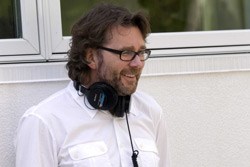