A trio of strong performances, witty dialogue, and a deft blend of snark and heart make this dramedy soar.
Camerin Courtney|December 11, 2009
Our Rating

I should hate Ryan Bingham. I got laid off six months ago; he's a professional layer-offer. I'm a 30something never-married woman; he's the spokesmodel for commitment-phobic men. I should hate every inch of his well-coifed, frequent-flying, fictional self.

Because he's not just Ryan Bingham, he's George Clooney at his dramedy best. And he's powered by Jason Reitman, who blends snark and emotion (and yes, a bit of sleaze) with a deft touch. And Ryan's prevented from being a one-dimensional stereotype with witty dialogue, understated acting, and a couple of interesting plot twists.

We first meet Ryan in his nirvana: an airport. Not only does he fire people, he flies all across the country to be the stranger swinging the unemployment axe. While the newly unemployed sitting across the table from him seethe and cry and ask gut-wrenching questions about their future, Ryan sits there coolly—like the wine glass on those motion-neutralizing mattress commercials. Someone's jumping up and down on the other side of the queen-size and it's just sitting there all still and sophisticated. That's Ryan in the face of these emotional displays.

When he's not doing the dirty work of wussy bosses, Ryan's happily racking up frequent-flyer miles and elite membership status with various hotels and rental car agencies. And occasionally doing some motivational speaking at business conferences, asking the nameless masses in generic hotel conference rooms, "How much does your life weigh?" and "What's in your backback?" Then he encourages attendees to winnow out all the unnecessary possessions and personal relationships that are just weighing them down.

Ryan's carefully crafted world of "making limbo tolerable" for the people he fires—and ... 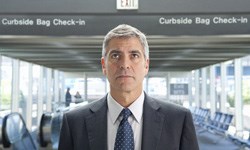