In the new film Not Easily Broken—based on the T.D. Jakes novel—actor Morris Chestnut plays a man facing the choice of whether to keep his vows.
Chanel Graham|January 6, 2009

Morris Chestnut is that actor you know but can't quite place where you've seen him.  After nearly two decades of starring in films like Boyz in the Hood, The Best Man and The Perfect Holiday, Chestnut has successfully carved out a niche for himself as the urban romantic lead.

In his latest film, Not Easily Broken, opening Friday, Chestnut leaves the dating drama behind to explore how a marriage can quickly fall apart without the three-strand cord of two committed people and faith in God.

Based on the novel by pastor and author Bishop T.D. Jakes, Not Easily Broken follows the marriage of Dave (Chestnut) and Clarice (Taraji P. Henson) Johnson. Forced to become the breadwinner for the family after an injury destroys Dave's athletic career, Clarice grows increasingly addicted to her own professional success, ultimately ignoring her husband's desire for a family. When Clarice is injured in a near-fatal car accident and Dave finds comfort and temptation in a friendship with his wife's physical therapist, the fragility of the Johnsons' marriage is exposed. Faced with the threat of divorce, the couple must decide if their marriage is beyond repair.

CT Movies spoke with actor/producer Chestnut about Not Easily Broken, the joy of working with breakout star Taraji P. Henson (a major role in The Curious Case of Benjamin Button), and why he feels belief in a higher power is crucial to a lasting marriage.

Not Easily Broken begins where most other love stories end—the wedding. Why do you think so few films focus on the marriage stage of a relationship rather than dating?

Morris Chestnut: I think it's more interesting for people to see the courtship, because that's always unpredictable and a lot of people can relate. With this particular ... 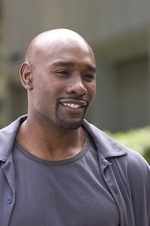