High school graduation is a hard topic to beat if you're looking for an event that involves a) people who are old enough to drive, b) a sense of entitlement to an extraordinary experience thatpromotes reckless decisions and in turn leads to comedically precarious situations,and c) unabashedly hormone-driven teens. Let the fun begin!

Or rather, in the case of I Love You, Beth Cooper, let the formula begin. Because while the high school graduation genre has produced some gems, this movie is a rather painful exercise in cliché and vulgarity. Being really funny could have gone a long way toward atoning for these sins, but the laughs are too few and far between to offer any mercy. 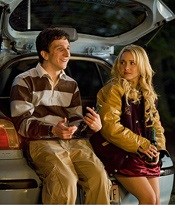 Beth Cooper gets off to a bad start with a graduation speech given by nerdy valedictorian Denis Cooverman (Paul Rust) in which he urges his class to speak their own personal truth before heading to college. Cooverman practices what he preaches by using his platform to call it like he sees it, publicly dressing down bullies and proclaiming his secret love for the head cheerleader. While the scene doesn't pack as much punch as you might hope, you gotta respect the kid for giving a speech his classmates will actually remember in twenty years.

Head cheerleader Beth Cooper (Hayden Panettiere) is amused, amused enough to accept an invitation to show up at Cooverman's house for a graduation party. But when she and her two sidekicks—Cammy (Lauren London) and Treece (Lauren Storm)—show up, it's just Cooverman and his nerd-of-the-movie-buff-variety best friend Rich (Jack Carpenter) at the "party." Lame. Then Cooverman manages to shoot himself in the crotch with a champagne cork. Double lame. 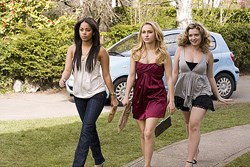 The party switches into high gear when Beth's "coked-up" bully of a boyfriend (Shawn Robertsas Kevin) and his friends show up to exact revenge for Cooverman's little speech. Fed up with Kevin's rageaholic behavior, Beth manages to rescue Cooverman and Rich from the beating they (and the house) were getting and the five of them are off for a night of adventure.

The first order of business will be surviving Beth's lack of driving skills. This a movie filled with underage drinking, suggested drug use, a group shower scene, and a ménage-à-trois—and arguably the most offensive part was Beth's driving, which would have certainly led to death and dismemberment for anyone in her path. And this is played for laughs! Since when did such enormously reckless driving become a punch line?

And that's in addition to the aforementioned litany of substance abuse and sexual vulgarity. One can also charge Beth Cooper with trading in misogynism. While Beth seems to have a pulse and distinct personality, her two best friends are walking clichés. The ditzy blonde makes cringe-worthy observations and throws herself at just about every guy she meets, including one who had already gotten all "date-rapey" with her. The token black girl surprises everyone when she busts out and recites Shakespeare. Look! She's (gasp!) smart! 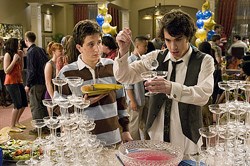 And then there's Denis's former girlfriend, whom he calls his "secret shame" because she's not pretty. She's about as pretty as he is, and for a few moments at the party where she's introduced, I have this bright hope that maybe this movie is about to get interesting. Perhaps Denis is going to ditch Beth (with whom, it should be said, he has no chemistry) and reconnect with his ex. But no. Boys, no matter how dweebish themselves, always go for the head cheerleader. Right. Back. To. The. Formula.

And not only is this movie formulaic, it's a formula concocted back in the '80s when director Chris Columbus was doing his much better work (The Goonies and Adventures in Babysitting, for example). Seriously. First, the soundtrack features Alice Cooper and Kiss prominently. And the kids go cow-tipping.

Alan Ruck—who played Cameron, Ferris Bueller's best friend in the 1986 teen classic Ferris Bueller's Day Off—makes an appearance here as Denis's dad, directing the boys to his stash of condoms and encouraging them to have some fun. But I'm with Denis when, halfway through his night to remember he says, "This isn't fun anymore."

Here's the bottom line: Denis Cooverman might love Beth Cooper. But I don't.

I Love You, Beth Cooper is rated PG-13 for crude and sexual content, language, some teen drinking and drug references, and brief violence. The PG-13 rating pushes the boundaries. Most of the sex stays off screen, but there is a group shower scene and group sex just off screen. And Rich spends the movie making people wonder whether he is or isn't gay (the question that leads to the ménage-à-trois). Underage drinking abounds and drug use is suggested. And reckless/drunk driving is depicted as something comic.