Public Enemies director Michael Mann often blurs the line between the good guys and the bad in the moral crossfire between cops and robbers.
Jeffrey Overstreet|June 30, 2009

Editor's note: "Through a Screen Darkly," a monthly commentary by CT Movies critic Jeffrey Overstreet, explores films old and new, as well as relevant themes and trends in cinema. The column continues the journey begun in Overstreet's book of the same name.

When the name Michael Mann appears at the front of a movie—as it does before Public Enemies, opening this week—you know you're in for a heat wave. And probably a crime wave too.

Mann loves to turn up the temperature. His films follow fevered individuals pushing back against "the Man"—that is, the oppressor. The establishment. The forces that would make one conform to a program. And in that friction between the corporation and the Individual with a Vision, things turn violent.

Sometimes the individual is a brave and moral hero caught in the crossfire of corrupt forces. Think of Will Graham (William Petersen), the unconventional FBI specialist tracker in Manhunter; Hawkeye (Daniel Day-Lewis) in The Last of the Mohicans; or Lowell Bergman (Al Pacino) on a crusade for truthful journalism in The Insider.

Sometimes that hero is not quite so admirable. Lieutenant Vincent Hannah (Pacino) in Heat wreaks havoc on the lives of those dear to him in his furious pursuit of bank robbers. And both Crockett and Tubbs of Miami Vice—the television series that brought Michael Mann to fame, and the movie that paired Colin Farrell and Jamie Foxx—make moral compromises all the time in their single-minded quest to bring down drug lords.

And sometimes—as in Mann's new movie Public Enemies—the "hero" is almost 100 percent criminal, pursuing his vision in defiance of the law. Like The Joker, John Dillinger (Johnny Depp) pursues an ambitious and violent agenda, ... 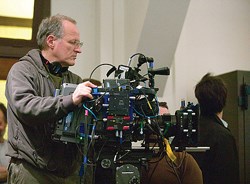