The director of Independence Day and The Day After Tomorrow is back with his most over-the-top, overwrought, and over-long apocalypse. Ever.
Steven D. Greydanus|November 12, 2009
Our Rating

Roland Emmerich or Michael Bay: Who is Hollywood's true reigning King of Schlock?

Emmerich's next film was the Revolutionary War cartoon The Patriot, followed a year later by Bay's WWII cartoon Pearl Harbor. After that, both Emmerich and Bay took stabs at dystopian near futures with The Day After Tomorrow and The Island, respectively.

By this point in their careers, a few things are clear. Emmerich has a dimmer vision of the future than Bay; his movies offer real apocalypses, while even Bay's Armageddon is about an apocalypse averted. But Bay has a dimmer outlook on mankind. Emmerich seasons his schlock with schmaltz, with cornball speeches about decency, loyalty, family and humanity. Bay likes his trash trashy, with generous dollops of gratuitous sleaze and exploitation.

In Bay's movies, women are sex objects—pinups and playmates if not bimbos, strippers and/or prostitutes—while men are cocky, testosterone-charged studs or else wish they were, by gum. Men and women in Emmerich's movies are no less cartoony, but the women are wives, ex-wives and daughters, while ... 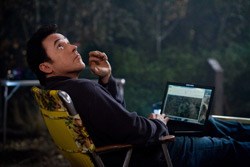