A lighthearted but ultimately lightweight look at the theatrical life of one of biggest icons in Hollywood history.
Brett McCracken|November 25, 2009
Our Rating

Anyone who ever made it in the entertainment business got there because of some "big break." But do these breaks happen because of luck? Or talent? Or both? In Me and Orson Welles, directed by Richard Linklater (Waking Life), we witness the early days of one of Hollywood's most successful icons and can decide for ourselves whether luck or talent plays a bigger role in his success.

This movie tells Welles' story through the eyes of a wide-eyed high school student named Richard (Zac Efron) who, in 1937 New York, stumbles into a small role in a production of Julius Caesar that Welles (Christian McKay) is staging in his newly formed Mercury Theater on Broadway. The film is a sort of behind-the-scenes look at the wild world of theater in general, and particularly the even wilder world of Welles—a womanizing, narcissistic, magnetic force of American nature destined for greatness. Richard is in over his head, for sure, and next to Welles he's about as embarrassingly minute as Miley Cyrus would be if she starred in a film opposite Judi Dench.

Perhaps that's why, when Richard goes head-to-head against Welles over a woman (Claire Danes) later in the film, it's hard to root for Richard's success. He's outmatched in every way by Welles, and even if he is more virtuous and less tainted by ruthless ambition, he's painstakingly boring by comparison. But maybe he's just young. How interesting can a high school teen be, anyway?

None of this is Efron's fault. The former Disney Channel/High School Musican star is perfectly fresh-faced and innocuous in the part, and he capably embodies the sort of "aw shucks, mister!" vibe of a raised-in-the-Depression New York youth. But Efron can't help the fact the film's real star—the British actor ... 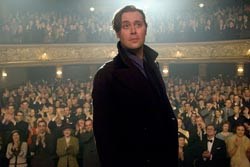