This emotionally fraught movie steers clear of melodrama to deliver a poignant portrait of how soldiers deal with the specter of death.
Lisa Ann Cockrel|November 20, 2009
Our Rating

Those words echoed in my ears several minutes into this film as Staff Sergeant Will Montgomery interrupted a man working in his yard to tell him that his son had been killed in Iraq. Lashing out with vicious sorrow, the father, Dale Martin (played by Steve Buscemi), trails Montgomery and his commanding officer back to their car, spewing insults, wishing Montgomery, not his son, was dead. "Why weren't you there!"

What this father doesn't know—and probably doesn't want to know—is that Montgomery was there. Played with remarkable control and nuance by Ben Foster, the young sergeant has recently returned from the Middle East after a dramatic brush with his own death. Not that you'll find any explosive flashbacks in The Messenger. The screenplay by director Oren Moverman (I'm Not There, Married Life) and Alessandro Camon focuses on the aftermath of war, a quieter-but-no-less-intense companion to this summer's The Hurt Locker.

Back at home and recovering from injuries seen and unseen, Montgomery is assigned to spend his last few months in the military as a member of the Army's Casualty Notification Team. He protests that he neither received nor gave any grief counseling himself (hinting at his own harrowing story) and is unqualified for the task. But he quickly learns that as a member of this team, his job is succinct—deliver the news. That's all. No counseling. Under no circumstances do you touch the NOK (next of kin, in Army parlance). Notify. Express official condolences. Get in and get out.

Montgomery is put under the command of the hardnosed Captain Tony Stone (Woody Harrelson), given a pager, and, after a bracing speech from Stone, told to be ready. He pours over a thick, three-ring ... 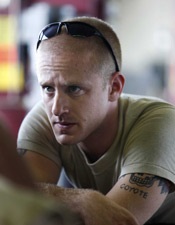