Robin Williams and John Travolta prove they really are past their prime in an inept comedy about two aging bachelors who suddenly find themselves babysitting two 7-year-olds.
Russ Breimeier|November 25, 2009
Our Rating

I can certainly sympathize with longtime favorite actors Robin Williams and John Travolta after all they've endured in recent years. Williams has coped with alcoholism, divorce, and heart surgery, while the Travolta family suffered the tragic loss of 16-year-old son Jett.

But it's much harder to sympathize with a terrible creative decision like Old Dogs, which could best be summed up in one word:

Seriously, why do once great actors attach themselves to a dog of a picture like this? Surely they still have standards? Alas, their judgment seems to be fading, as Williams' career continues its self-destructive nosedive, with Travolta seemingly eager to follow.

The trailer for Lost Dogs is unfunny, but explaining the actual plot is even worse. Williams and Travolta respectively play Dan and Charlie, lifelong friends who run a successful sports marketing firm together. How they're successful or why they remain friends is a mystery, since Charlie endears himself to clients by sharing embarrassing personal stories about Dan.

This device provides us with backstory explaining that Dan's wife divorced him seven years ago. To console his friend, Charlie takes him to Miami for a weekend of binge drinking and womanizing—both leading to an accidental marriage that is quickly annulled the next day. Charlie's "punchline" point is that Dan divorced twice within 24 hours.

Later, Dan learns that his one-night-stand "ex-wife" Vicki (Kelly Preston, Travolta's real wife) wants to get together while she's in town. They meet for lunch and she reveals that he's the father of 7-year-old twins Zach (Connor Rayburn) and Emily (Ella Bleu Travolta in her big-screen debut). In the very model of contrived plotting, she also mentions that she's about ... 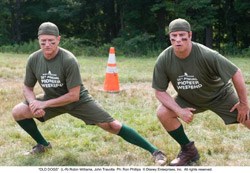