There are a wealth of reasons to be excited about The Princess and the Frog. The hand-drawn animation and jazzy, Broadway-inspired musical numbers hearken back to Disney's golden ages in both the 1950s and the 1990s. Tiana (voiced by Anika Noni Rose) is Disney's first African-American heroine. The film celebrates the Jazz Age in one of America's most romantic cities. And the film deliciously skewers Disney's princess machine—though of course without killing that cash cow altogether.

As a little girl growing up in the French Quarter of New Orleans, Tiana shared her father's dream of opening a restaurant in an old mill. Tiana has mastered her father's gumbo recipe and internalized his ethic of hard work. Her father's death only makes her dream stronger, and now she holds down two waitressing jobs, saving up to buy that mill.

Though music and food hold tremendous sway over New Orleans, it's voodoo that reigns supreme. Dr. Facilier, aka Shadowman (voiced by Keith David), has "friends on the other side" who have promised him wealth and power if he'll only deliver them souls. He seizes upon visiting Prince Naveen (voiced by Bruce Campos), turning a tarot card reading into a black magic kidnapping. Shadowman turns Prince Naveen into a frog to get him out of the way so that Shadowman can kick his plan into high gear.

Prince Naveen escapes Shadowman and stumbles across Tiana, dressed as a princess for her wealthy white friend Lottie's (voiced by Jennifer Cody) masquerade ball. He manages to persuade Tiana to kiss him by promising to help her get her restaurant—but instead of breaking the spell, Tiana herself is transformed into a frog. Joined by a lightning bug and an alligator, they make their way deep into the bayou to ... 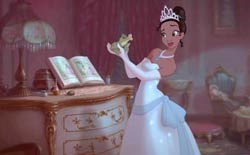