The directorial debut of The Office's John Krasinski provides no easy illumination to its actual question—what do men really want?
Lisa Ann Cockrel|September 25, 2009
Our Rating

About a month before Brief Interviews with Hideous Men started filming—and not long before the author David Foster Wallace committed suicide—director and ambitious adaptor John Krasinski (Jim in TV's The Office) discussed the project with Wallace. Wallace's book—an exploration of the male psyche via 23 interviews with men all discussing a personal grotesque or bizarre characteristic—had been deemed unfilmable. But Krasinski was determined to bring the material to the big screen (it was adapted for stage in 2000) and created a character to help tie together the inchoate narrative.

"I told him [Wallace] how I had changed the script to center around a woman who is either a psychology or anthropology grad student and that's her connection to these men, she's interviewing them for her thesis," Krasinski explained in a recent interview. "He [Wallace] paused, and then he said that's what he was trying to do in the book. He wanted to write about a character that you never hear from and never see, but by all the characters around her, you know who she is."

If he had lived to see the movie's release, I have to think Wallace would have been impressed with the way that Krasinski's Sara (Julianne Nicholson) manages to embody his aim by being both at the center of the film and also practically invisible. I would be shocked if her dialogue ran to more than five pages total, a pittance for the central character of a movie. Sara is the calm at the center of this tornado of testosterone, so calm she might actually be a vacuum.

Wallace wondered if Krasinski's decision to give Sara a personal connection to one of her subjects was the answer to making sense of the whole thing. And I think it might have been. But this Sara ... 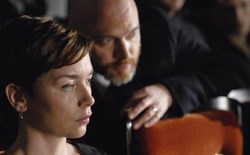