Though structurally troubled, this directorial debut from Guillermo Arriaga is a gut-wrenching look at the wages of our wrongdoing.
Alissa Wilkinson|September 18, 2009
Our Rating

The Burning Plain, the directorial debut of Oscar-nominated screenwriter Guillermo Arriaga, tells a story that seems as if it could have been lifted directly from some hidden corner of the Old Testament: the sins of the fathers are visited on the children, faithlessness is repaid with heartbreak, and sins most certainly find the sinner out. Guilt, pain, love, hate, unfaithfulness, treachery, and fear are stretched across a backdrop that spans from Mexico to Oregon, across languages and families and landscapes, across three seemingly disparate stories:

This would be a great film, but its narrative structure just won't allow it. True to form, Arriaga (who wrote Amores Perros, 21 Grams, The Three Burials of Melquiades ... 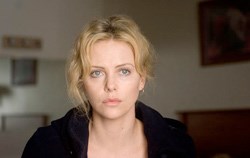