Clarence Fountain on music, "creative differences," racism, faith, and what keeps him going after seventy years in the biz.
Andrew Greer|September 22, 2009

The Blind Boys of Alabama celebrate their seventieth anniversary in the music biz this year. But when the vocal band's former lead singer and founding member, Clarence Fountain, went missing from the Gospel Music Hall of Fame group's roster in 2006, little fuss was made over the split, originally attributed to the nearly 80-year-old singer's sensitive diabetic condition and later revealed as a creative feud between Fountain and the Blind Boys' management. Forging on with his first release since leaving the lineup, the Grammy Award-winning vet volunteers his own take on the controversial break-up, talks about his recent release, Stepping Up & Stepping Out (One World Entertainment), with ex-Blind Boys' guitarist and friend Clarence Butler, and explains why even though he's gained a young cult following, he'll always sing gospel music.

You recorded the new album with Blind Boys' veteran guitarist, Sam Butler. So is it any different than a Blind Boys record?

Clarence Fountain: It ain't no different. We just cut it down, took the Blind Boys off, put on another background and went ahead. The record's all right.

Your left the Blind Boys for what has called "creative differences." Blind Boys manager Charles Driebe expounded on that by saying, "It's hard when you're king of the jungle for 60 years to have to slow down." Is that what it boiled down to? 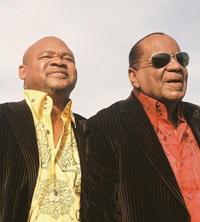