A documentary about the church's image problem in America makes a strong argument for Christians to shout less and love more.
Tim Avery|September 25, 2009
Our Rating

"A movement can exist without a god, but never without a devil," says Tony Campolo, paraphrasing writer Eric Hoffer, in the documentary Lord, Save Us From Your Followers. Directed by Dan Merchant, an evangelical Christian, Lord, Save Us looks at how the church in America is perceived by non-Christians. Merchant's assessment: we're more known for our "devils" than we are for our God, and we've got to do something about it.

Lord, Save Us was actually released on DVD last year, when CT Movies ran an interview with Merchant, and it has since been screened at venues from evangelical churches to liberal universities. Now it is making a limited theatrical run. (For a list of theaters, click here.)

The film is a large-scale critique, but it's wrapped around a personal narrative. Merchant briefly recounts his conservative evangelical upbringing—which included a lot of The 700 Club—and then brings viewers up to the point when he felt compelled to make this film. A trip to Africa showed him a side of the church that looked very different than the church he knew in America. Despite the harsh conditions they lived in, the African believers were full of kindness, joy, and grace—he heard none of the antagonistic rhetoric that often comes out of the American church. If our faith is the same as theirs, Merchant wonders, "Why is the gospel of love dividing America?" He starts by showing how the church is "dividing America"; he ends with some ideas for fixing that.

Merchant's personality is one of the film's strengths. He is goofy, wry, and above all else, humble. "I don't act very much like Jesus," he says early on, including himself in his critique of the church. That humility is important, because it's at the heart of ... 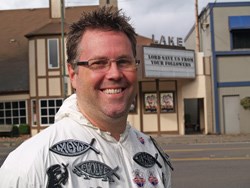