Every now and then, two or three movies will hit upon the same idea at the same time—and right now, the hot topic du jour seems to be remote-controlled bodies. A few weeks ago, we saw humans controlling fellow humans in Gamer, and a few months from now, we will see humans controlling extra-terrestrial hybrids in James Cameron's Avatar. But for now, we have Surrogates, a futuristic sci-fi flick in which something like a billion humans—including nearly all Americans—conduct their affairs through robot duplicates of themselves.

Well, okay, the robots aren't always exact copies of the people who operate them. Near the beginning of the film, two robots—a man and a woman—are about to have a quick little tryst in an alley behind a nightclub, and it is revealed not long afterwards that both of these machines were operated by men. So the whole concept of robot "surrogates" is, on one level, an extrapolation of current anxieties around virtual identities: How do you know that the man or woman you met online really is who and what they claim to be?

On an even deeper level, though, the film is largely about the human desire for safety and immortality, and how we humans need to expose ourselves to risk, danger and even the certainty of death if we are to be truly alive. The story centers on John Greer (Bruce Willis), an FBI agent who rarely leaves his chair at home because he is hooked up to a surrogate that does all the hard work of going to the office, investigating crime scenes and chasing the odd criminal. Greer is good at his job, but he is frustrated because all this technology has come between him and his wife Maggie (Rosamund Pike); he wants to spend time with her, to really and truly be with her in ... 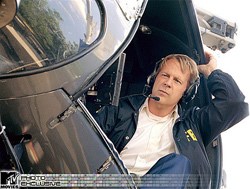