Adam Young, the creative mastermind behind the overnight sensation Owl City, is a shy insomniac who takes his faith as seriously as his music.
Mark Moring|April 20, 2010

Last summer, few people had heard of Owl City, the one-man synth band masterminded by 23-year-old Adam Young of Owatonna, Minnesota. But when his first label album, Ocean Eyes, went online on July 14, the iTunes music store chose "Fireflies" as its single of the week. The next thing Young knew, he was practically redefining the term "overnight sensation." "Fireflies" had 650,000 downloads that first week, and it wasn't long before it was the No. 1 song in the U.S. (It has been played almost 30 million times at his MySpace page.) Suddenly, everybody knew who Owl City was, and album sales skyrocketed. A star was born.

What many people don't know about the young man behind the irresistibly catchy tunes, the sweet voice, and the silly-fun lyrics ("I'd get a thousand hugs / From ten thousand lightning bugs / As they tried to teach me how to dance") is that he's a devout Christian who takes his faith as seriously as his music. We caught up with Young recently on his U.S. spring tour—via e-mail, because he's too shy to do interviews in person—where he was selling out small theaters across the country. Many of those tickets went to teenage girls, who screamed and squealed nightly as he took the stage. And they sang along. To. Every. Single. Word.

I've read that you're pretty shy, but you put on a dynamic live show. What brings you out of your shell on stage?

I quite like my shell and often prefer it over the bustle of social gatherings, wedding receptions, parties, or any large group of people for that matter. Even Christmas holidays can feel a bit "too close" for me, so it really is ironic that such a reclusive hermit like myself has landed the job of a social butterfly. I don't really have anything else to offer other ... 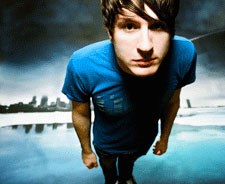