Whether you consider the 1981 original a campy or classy (or both) interpretation of Greek mythology, this noticeably different remake is far too loud, angry, stupid, and humanistic by comparison.
Russ Breimeier|April 1, 2010
Our Rating

As a film critic, I'm a strong believer in divorcing one's opinion of a movie from that of the source material. The film in question needs to stand on its own merits, period.

So when I declare this remake of Clash of the Titans to be flat-out awful, it's not because I have great affection for the 1981 original. That film remains (for me) a wonderful depiction of classic Greek mythology in all its heroic romanticism, complete with a rousing score and imaginative visual effects by stop-motion pioneer Ray Harryhausen (Jason and the Argonauts, The 7th Voyage of Sinbad).

Even so, the original has its flaws. It's corny, most of the performances are too melodramatic, and Harryhausen's effects were out of date thirty years ago. But the movie was a hit for its time and gained a devoted following through video rentals and cable broadcasts. A newer, big-budget remake could truly improve it, even if the new film deviates from the original story, which wasn't particularly true to Greek mythology to begin with. But what the Titans don't deserve is an overhaul as butchered and brainless as this.

The computer-generated visuals are as good as you would expect—and the only reason for 1½ stars. As a child, I was intimidated by the giant scorpions, unfazed by the giant (almost cute) Kraken, and terrified by Medusa. Now, thanks to modern technology, the scorpions are vicious, the Kraken is truly monstrous, and Medusa is even more horrific than before. (Still, it's unnecessary to see this movie in 3-D. Unlike Avatar, purposefully filmed in 3-D, Clash was converted after being completed in 2-D; I was underwhelmed by the "extra dimension.")

But the CGI extravaganza can't overcome all the other flaws: sloppy exposition, terrible dialogue, ... 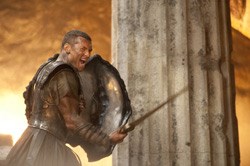