A remarkable real-life underdog story gets a tribute that is well deserved but could have been more compelling than this.
Tim Avery|April 16, 2010
Our Rating

It was a story begging for the big screen. Over the years 50 different filmmakers had tried—and failed—to win the rights to re-tell the true account of how a fledgling baseball team of poor kids from Monterrey, Mexico, turned the 1957 Little League World Series upside-down. When the original team members finally agreed to sell the rights to one W. William Winokur—who had no previous film experience, but would ultimately pen the screenplay—The Perfect Game was conceived. There's no reason to doubt Winokur's affection for their story. However, his re-telling of it shows his lack of film pedigree.

At the start of The Perfect Game we're dropped into 1950s Monterrey. Because of the film's limited budget, all the Monterrey scenes were actually shot in the Los Angeles area and then digitally doctored. For someone who's never been to Monterrey, it feels reasonably convincing. In fact, while the film is very flat in the early going, at least the setting is engaging—bustling open-air markets, grimy men in the factories, a quaint little church.

The team first begins to take shape because of a priest (Cheech Marin, in quite the departure from his "Cheech & Chong" days), who decides to bring hope to the local kids by encouraging them in their interest for baseball. When Cesar (Clifton Collins Jr., who earned many accolades playing a convict in Capote) shows up, they've found a potential coach.

Cesar has just come home to Monterrey after being ousted from a position in the St. Louis Cardinals' organization. He's utterly depressed and at first not interested in coaching anybody. But the kids finally convince him when they build a practice field out of an abandoned lot. Soon Cesar is feverishly trying to whip ... 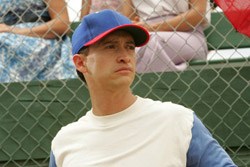