Let's start with this: Technically, Scott Pilgrim vs. the World is not an indie movie. I mean, not really. When I think of a truly independent film, I think of a motley crew of actors and filmmakers armed with their own cameras, a budget of virtually nothing, and a strong DIY aesthetic. And by those standards, Scott Pilgrim just doesn't fit the bill. It's a big-budget movie, relatively speaking, with visual effects that qualify as truly cutting-edge. In Michael Cera and Jason Schwartzman, it has at least two familiar actors. It has the backing of a studio. It's no Avatar, but it's no home movie, either.

I say all this because the film will likely be classified as an "indie comedy," but let's be more precise: Scott Pilgrim is more like an action-packed comedy that celebrates—and at times sends up—a particularly indie culture. It's fueled by punk rock and a love of classic Nintendo; its visual vocabulary is part manga, part Mario Brothers. Its quirky, sweetly awkward central love story feels cut from the same cloth as Juno, while its genre-bending sci-fi slant feels akin to Eternal Sunshine of the Spotless Mind. Its action scenes are spectacular, and it's the funniest picture I've seen all year.

So, what is it, exactly? It's hard to put into just a few words, except to say that it's an unmitigated joy and an absolute blast. So let's start with its origins. Scott Pilgrim vs. the World is based on a graphic novel by Bryan Lee O'Malley; his work fused a love of anime and manga with a particularly indie aesthetic and a sense of humor that managed to be sweet and irreverent at the same time.

The movie could be described in much the same way: In fact, director Edgar Wright—a cult favorite for films such as Hot Fuzz ... 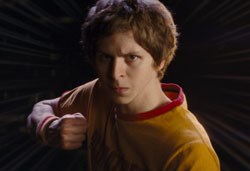