There aren't many reasons to see Gulliver's Travels. In trying to fill several different identities, it fails at all of them.

This movie wants to be a family film and an adaptation of Jonathan Swift's story and a Jack Black comedy vehicle0, but each identity robs from the others. Black's outlandish style is cramped, messages for kids are tainted by inappropriate material, and Swift's cultural themes are reduced to a dance sequence—seriously!

In this rendering, Lemuel Gulliver is a typical Jack Black character: a dopey-but-lovable loser who plays too much Guitar Hero and works in a New York newspaper's mailroom. Thanks to low self-confidence, he's stuck in his dead-end job and won't ask out his crush, Darcy, a travel editor (Amanda Peet), who seems to like him (but why she does is a mystery). Characters repeatedly mention that Gulliver, as a mailroom employee, is one of the "little people" and life won't get any bigger than this for him (get the metaphor?).

When Gulliver lies to Darcy about being a travel writer, she spends two whole minutes glancing at some unpublished writings he stole off the internet and hires him on the spot for a "small" article about Bermuda that requires a 3-week solo boat trip leaving right away. Good first gig, huh? Of course, Gulliver ends up not in Bermuda but on the island of Lilliput, where he finds himself a giant among tiny men. For the first time, he is the big (very big) man on campus. He strikes up a friendship with Horatio (Jason Segal), a man of low station who is convinced he'll never amount to anything—especially not winning the heart of the princess (Emily Blunt). While Gulliver helps Horatio court the princess, a rival suitor looks for revenge—and to rid Lilliput of ... 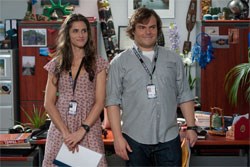