My high-school drama teacher used to tell me that if the first line of a theater or film review praised the set(s) then you were in serious trouble.

The shots of Venice were dazzlingly beautiful in The Tourist. I would really love to visit that city some day. That's not really a compliment for the film, though, is it?

It's not as though there is anything wrong with taking gorgeous and beloved Hollywood icons—Johnny Depp, Angelina Jolie—and dumping them into a beautiful, exotic location without much of a story. That formula is a studio classic, and great movies have been made using it. Roman Holiday comes to mind. Great movies, too, have been made around the conceit of an average person in an unfamiliar setting suddenly thrust into a web of intrigue beyond his or her comprehension. Think North by Northwest, Frantic, or Notorious.

The Tourist, though, can't really decide which of these formulas, if either, it wants to follow, or even whether it wants to follow them or spoof them. The plot is set in motion when Elise (Jolie), under surveillance from Scotland Yard, gets a note from her lover, who has stolen (we are never told how) hundreds of millions of dollars from gangsters and received plastic surgery to conceal his identity. He instructs Elise to board a certain train, select a passenger at random who approximates his last known features, and convince the authorities watching her that this innocent passerby is him. She picks Frank Tupelo (Depp), an American math teacher from Wisconsin, because he is reading a spy novel and because she knows he will be sufficiently smitten by her beauty to follow her to her hotel room no questions asked.

The premise sounds promising at the pitch level, and Jolie and Depp are each ... 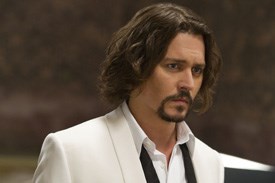