Martin Scorsese and Leo DiCaprio reunite for a psychological thriller set in post-war America that examines the darkness within.
Brett McCracken|February 19, 2010
Our Rating

Far safer, of a Midnight Meeting
External Ghost
Than its interior Confronting –
That Cooler Host –

Emily Dickinson's words in this poem offer severe insights into the psychological torments within the human mind—"Ourself behind Ourself." It's a theme that has been paramount in literature and art ever since: the depths, mysteries, and hidden horrors not of some external phantom, but of our internal self.

Martin Scorsese's Shutter Island is a film about the war within. It's a deeply psychological, feverish madhouse of a movie that relentlessly pushes its protagonist to the brink of sanity, and forces us to question our own distinctions between things like heroes/villains, real/unreal, and order/chaos.

Based on the 2003 novel by Dennis Lehane (Mystic River), Shutter follows two fedora-clad U.S. marshals in 1954 New England as they investigate the disappearance of an inmate at a hospital for the criminally insane—a hospital conveniently located on a craggy, mysterious island cut off from the mainland.

Leonardo DiCaprio plays the lead investigator (and the film's focal point), Teddy Daniels, who has his own secrets, demons, and delusions that become more and more evident the longer he stays on Shutter Island. As he and his partner Chuck (Mark Ruffalo) go about uncovering the secrets of the island, they encounter a motley crew of bizarre/creepy/insane characters, including a duo of the hospital's top physicians (Ben Kingsley and Max von Sydow at their malevolent best), lots of disturbingly off-kilter mental patients, and a smattering of guards, orderlies, ... 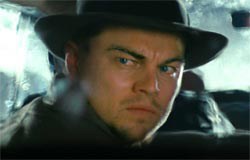