The candy equivalent of a conversation heart that reads "UR Sweet" is a nice enough sentiment, but who actually wants to eat one?
Lisa Ann Cockrel|February 12, 2010
Our Rating

Valentine's Day. Just the mention of it is likely to elicit squeals or groans—strong emotions that the makers of Valentine's Day the movie were no doubt trying to tap into with their star-studded opus to the charged day. But it's unlikely the movie will elicit such strong feelings. It's the candy equivalent of a conversation heart that reads "UR Sweet." There are worse things to be called, but the Greek king did not launch his thousand ships to tell Helen of Troy she was sweet.

Set in a spit-shined Los Angeles on the eponymous day, Valentine's Day follows roughly two dozen Angelenos as they grapple with their love lives, or lack thereof. Sienna Bouquet, a floral shop and café, serves as a rose-strewn center of gravity for the interlacing narratives. And its proprietor, Reed Bennett (Ashton Kutcher), is the leading man, if you wanted to try to pick one out. On this particular morning, he's rolled over in bed and proposed to his girlfriend Morley (Jessica Alba). When he leaves the house for work, hands held high in boyish exuberance, he's the picture of romantic optimism. As Reed tells his waiting employee and best friend Alphonso (George Lopez), he proposed on the perfect day. He can be as happy and sappy about love as he wants to be and no one can complain because it's Valentine's Day. And together they drive off in the Sienna Bouquet delivery van to greet the day with their floral arrangements.

Of course, people can complain. Valentine's Day includes the unlucky in love too. But given that chief among these ranks are the successful and drop-dead gorgeous Kara (Jessica Biel) and the friendly and no-less-beautiful Julia (Jennifer Garner), it's hard to feel like unlucky in love gets a fair shake. As Reed's best friend, ... 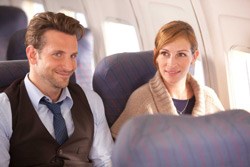