There probably aren't too many alternative rock bands coming out of Russellville, Arkansas, but you gotta start somewhere—and Deas Vail is a nice place to start.

Even though they've been around a few years and have recorded several albums, Deas Vail—most of whom met at Arkansas Tech in Russellville—has just gotten a little more famous in recent months following a tour with the hugely popular Owl City, soon to be followed by a slot on Copeland's farewell tour and then some gigs on the Vans Warped Tour this summer. Combine that with an stellar new album, Birds & Cages—their first with Mono vs. Stereo, the label created by members of Relient K—and this band is poised to take off.

The band's name is a loose blend of Latin and French, translated "humble servant." We caught up with founders Wes and Laura Blaylock, the husband-wife duo who make up the core of the band, before an Owl City show in Madison, Wisconsin, recently.

How would you describe your music?

Wes: I don't know how to compare our band to other bands. I hope that it's honest music. I hope that it's music that feels like it's written with thought, and by somebody that cares about what's being performed and what the words are meaning.

Laura: I feel like our music is very organic, energetic, full of life and who we are. It kind of fills up the space. I don't really know so many music terms to use as far as describing it, because it just is what it is.

You feel like you're creating something new and different?

Wes: It just depends on the listener. I wouldn't assume that we were that original or that we're that genius or that we're doing something that's never been done before. 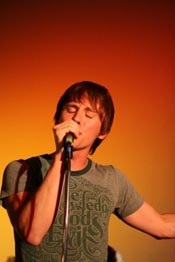