With his first feature film, That Evening Sun, writer-director Scott Teems wants to depict truth—even when it's ugly—and thinks all Christian filmmakers should aim for that.
Mark Moring|January 27, 2010

In what some are calling his best performance, Hal Holbrook plays Abner Meecham, an aging Tennessee farmer looking to reclaim his old life in the critically acclaimed That Evening Sun, a film now playing in limited release.

The film begins with Abner fleeing a nursing home and returning to his country farm to live out his days in peace, only to discover that his son has leased the farm to Abner's old enemy and his white trash family. Not one to suffer fools or go down easy, Abner moves into the old tenant shack on the property and declares that he won't leave until the farm is returned to his possession. But Lonzo Choat, the new tenant, has no intention to move out or give in to the old man's demands. This sets up a ruthless grudge match between Abner and Choat, each man right in his own eyes, each too stubborn to give an inch.

It all plays out under the watchful eye of 34-year-old Scott Teems, who wrote and directed the film, based on a short story by William Gay. Teems, a Christian, talked with CT about That Evening Sun, working with Holbrook, and his philosophy of filmmaking.

That Evening Sun has been described as a Flannery O'Connor-esque tale from the South, also as a "classic Southern Gothic." Would you agree those assessments?

The great difference between O'Connor and William Gay is the action of grace in the midst of chaos. Perhaps this is where I diverged most from the original story, bringing a hint of hope and grace to the ending, where Gay's story was more bleak and hopeless. I'm not sure whether this betrays Gay's vision or not—I've asked myself this question often in the months since finishing the film, as I believe that fidelity to the original author's intent is my highest responsibility in the adaptation ... 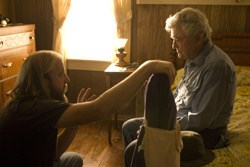