Following a year in the life of a platoon on the frontlines of Afghanistan, this award-winning documentary plays somewhat detached despite the remarkably intimate war footage.
Russ Breimeier|July 2, 2010
Our Rating

The tagline for Restrepo, which won the Grand Jury Prize for Documentary at the 2010 Sundance Film Festival, sums it up fairly well: "One platoon, one year, one valley." In a sense, it's the ultimate example of a reality show, filmed by two photojournalists, both regular contributors to Vanity Fair magazine and ABC News: Tim Hetherington and Sebastian Junger (author of The Perfect Storm).

Afghanistan's Korengal Valley (near the border of Pakistan) was considered one of the most dangerous military hot spots in the world. In 2005, Taliban insurgents cornered a four-man SEAL team there—only one of them survived—then destroyed the helicopter that was sent to rescue them, killing sixteen more soldiers. According to the film, American military were under fire here every day; they were even shot at while asleep in their barracks. Troops literally seized control from hilltop to hilltop, a hundred yards at a time.

Hetherington and Junger obtained permission to spend the better part of a year (beginning in May 2007) with the Second Platoon, Battle Company in Korengal. Much of their time was spent with the 15-man strategic outpost high on a mountain in the valley, nicknamed "Restrepo" by the troops in honor of their medic Juan "Doc" Restrepo, killed in action shortly after arrival.

Restrepo is not a politicized documentary. There are no interviews with politicians, generals, or Afghans—only the soldiers involved. The filmmakers' goal was simply to tell the stories of the soldiers and show some of what they endured, holed up in an outpost with no running water, Internet, phones, or at times, electricity or heat. If these soldiers needed backup, a helicopter would never arrive in time to save them. 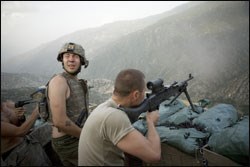