Documentary explores the question, "What is a megachurch?"
Tim Avery|June 8, 2010
Our Rating

It shouldn't surprise that the documentary The Alpha and the Mega (Clothespin Films) is more introductory than groundbreaking.

The film, available on DVD, explores the question, "What is a megachurch?" Director Morgan Mead, a small-town Indiana boy, attended his first megachurch a few years ago, and was so intrigued that he went looking for more, camera in tow.

When someone invokes the label megachurch, it's usually not meant as a compliment. Alpha strikes a balanced tone, though, in part because its lead source—Hartford Institute sociology of religion professor Scott Thumma—is relatively sympathetic. As Mead visits churches both mega and mini, he finds that pastors have a spectrum of opinion on the megachurch, from "different strokes for different folks" to "contrary to Scripture."

Alpha hits on many of the salient questions: Is the church more for believers or seekers? Can a big church care for everyone? Does breadth preclude depth? Should we entertain attendees? If you have already given this debate some thought, you'll wish the issues were more finely delineated and more deeply probed. But its irenic spirit and pastoral voices make Alpha a solid primer to the megachurch phenomenon. 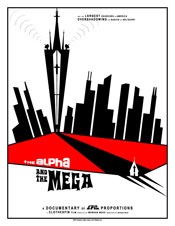