This unconventional love triangle gets a lot of laughs out of awkward tension and explores the challenges of being honest amid complicated relationships.
Tim Avery|June 18, 2010
Our Rating

Two guys vying for one girl—it's a story that's been told a few times before. But the new comedy-drama Cyrus brings an unconventional angle to the well-worn love triangle.

John (John C. Reilly) is divorced and has given up hope of meeting another woman he could be with. But he's still on friendly terms with his ex-wife Jamie (Catherine Keener), who drags him to a party in the hope of helping him find someone new. Despite his lack of social grace, John eventually hits it off with a woman named Molly (Marisa Tomei).

They start spending a lot of time together, but never at Molly's place. John suspects she's hiding something, so one evening he tails her back to her house. There he discovers her secret: Cyrus (Jonah Hill), a chubby 21-year-old with an unrelenting, watery-eyed stare and a passion for avant-garde synth compositions—and who is Molly's son by her long-deceased husband. Cyrus still lives at home and has no friends outside his mother. To him, then, John is a rival, and soon he launches a war of stolen shoes and midnight threats.

There are other films in which, to win the woman he loves, a man must also win over a kid; About a Boy is one instance. But the difference with Cyrus is that the "child" obstacle—being a maladjusted 20-something who is extremely close to his mom—at times plays more like a romantic rival. Such a combination sounds troubling, but this mother-son relationship remains innocent enough to be more awkward than disturbing. The awkward dynamic lays the foundation for a brand of humor that is refreshingly unexpected and smartly understated.

In one scene, for example, John and Cyrus are talking in Molly's bedroom while she takes a shower in the adjoining bathroom. Cyrus then casually ... 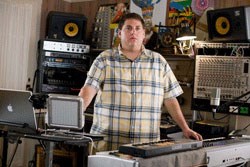