This cautionary tale about science without boundaries goes to such lengths to "cross the line" narratively that it leaves the big questions behind.
Tim Avery|June 4, 2010
Our Rating

Splice is a modern-day variation on Frankenstein: what happens when science makes an unnatural form of human life. In Mary Shelley's classic novel, the creature is a re-animated bundle of human body parts that, contrary to many popular re-tellings of the myth, has a keen intelligence. Nonetheless, his hideous appearance denies him a place in human society. The story raises questions of science's boundaries and what it means to be truly human.

In Splice's 21st-century scenario, the featured creature arises not from a patchwork of human remains, but instead from a genetically engineered blend of animal and human DNA. This premise, which sets us up to wrestle with some of the same questions, is all the more relevant in light of today's advanced bio-engineering technology and debates about human cloning.

Unfortunately, Splice is more in the tradition of the popular Frankenstein myth than it is Shelley's original, diminishing the human nature of its monster in favor of its brutish nature. This amplifies the surface-level horror, but it glosses over the weightier questions of tampering with human nature. For all its seeming ethical import, Splice shocks us not to make us think, but just for shock's sake.

The creators of this part-human, part-animal being are Clive (Adrien Brody) and Elsa (Sarah Polley), the Brangelina of bio-engineering. At the film's beginning, they successfully engineer a new hybrid animal species that looks like Flubber and promises a wealth of disease-fighting proteins for the pharmaceutical company they work for, NERD (Nucleic Exchange Research & Development).

Flushed with success, Clive and Elsa go to their corporate boss and pitch their most ambitious plan yet: throw human DNA into the mix. As they see it, ... 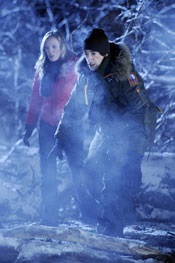