Despite the potential for thrilling adventure in an exotic setting, this adaptation of the popular video game series is an ultimately forgettable summer blockbuster.
Russ BreimeierMay 28, 2010
Our Rating

With the second half of the film's title, it's obvious that Walt Disney Pictures would love for Prince of Persia: The Sands of Time to kick off a new action-packed franchise. Reteaming again with producer Jerry Bruckheimer, they're clearly positioning this as the next Pirates of the Caribbean. And since it's inspired by a popular video game series dating back to 1989, the hope is that Prince of Persia has a strong built-in audience.

But that's all marketing rhetoric. I'd love to say POP:SOT is the first truly successful movie adaptation of a video game (at least it's better than most attempts) or that it's true to the source material (though faithful in spirit, the plot details are different), but who cares? Does any of that ultimately matter if the results yield another mediocre and forgettable summer blockbuster?

Jake Gyllenhaal stars as Dastan, the prince in the title, and there lies one key problem. With all-American boy-next-door good looks and a put-on British accent, Gyllenhall looks about as Persian as Canadian teen-pop star Justin Bieber (or as Siamese as Yul Brynner in The King and I, or as Mongolian as John Wayne in The Conqueror). The story takes place within the heart of The Persian Empire during the height of its reign hundreds of years before Christ's birth—not exactly an ideal time for Persian-European relations. Gyllenhaal isn't the only casting oddity, though at least some of the other British actors are passably Middle Eastern.

Still, the main problem isn't whitewashing, but believability. Everything seems staged rather than recreated; it feels more like another sword-clanging fantasy in Middle Earth than an adventure in the Middle East.

Dastan, a street urchin, is adopted by King Sharaman because he ...

Join in on Facebook
Tags:
Film
Posted:
May 28, 2010
More From:
Russ Breimeier 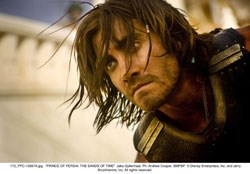