The potential for laughs in a road trip comedy is as open as the road before the mismatched characters driving the film along. The destination doesn't matter; Murphy's Law is certain to throw some oddball situations along the way. But a quick glance at the top-grossing movies in this comedic sub-genre reveals one key point: who is riding in the car matters far less than the writing itself.

That's apparent in Due Date, a comedy pairing Robert Downey Jr. and Zach Galifianakis in a three-day cross-country drive from Atlanta to Los Angeles. It's being promoted as the latest from the makers of The Hangover, the top-grossing R-rated comedy of all time. Granted, it's got Hangover's scene-stealing Galifianakis and director Todd Phillips. But Due Date doesn't have the same writers, and since Phillips also helmed the 2000 stinker Road Trip, he's hardly a sure thing for this sort of comedy.

The premise is simple enough. Downey plays Peter Highman, an architect on a business trip looking to get home to his wife Sarah (Michelle Monaghan) in time for the birth of their son. But fate intervenes at the airport when his limo is hit by a station wagon transporting Ethan Tremblay (Galifianakis), an aspiring actor heading to Hollywood with his French bulldog after attending his father's funeral.

You can tell a lot about a road comedy from its explanation for the pairing of the odd couple; hopefully it's something silly and complicated that would spark such an unthinkable journey. In this case, Peter and Ethan accidentally switch bags at the curb and Peter is caught with marijuana at the security check. Though still allowed to board the flight, he and Ethan are quickly ejected and put on the No Fly list after engaging in a noisy argument about ... 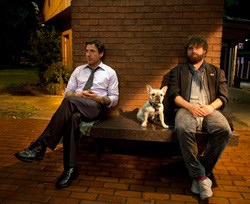