Mountaintop removal (MTR) coal mining is the biggest environmental problem you've never heard of. A common procedure in the Appalachian region, MTR uses explosives to blow up to 1,000 feet off the tops of mountains to extract layers of coal buried within. Coal companies often push the remaining rock and soil into surrounding valleys, destroying streams—and, often, the lives of destitute people—below.

Enter Deep Down (Forward Films), a documentary that attempts to expose the problem of MTR by hanging human flesh on a complex environmental issue. The film, airing tonight on the PBS series Independent Lens, centers on Beverly May and Terry Ratliff of Maytown, Kentucky, neighbors on opposite sides of the same literal—and philosophical—mountain.

When Miller Brothers Coal Company offers to lease their land for MTR, May turns them down, but Ratliff considers signing on. He's a carpenter with no health insurance or retirement income, so it's easy to understand his interest in an offer of $75,000 to lease six acres.

May sees MTR as an "abomination" that should be outlawed because of its effect on the quality of water, the safety of homes, and the peace of communities. "You're not supposed to blow the top off a mountain and dump the rock and the rubble into the nearest creek," she says. But Ratliff sees mining as a necessary evil to sustain a region that runs on coal.

Rather than punching through a list of statistics or slapping viewers with jarring scenes of devastation, Deep Down approaches the issue in a deeply personal way, looking at lives rather than landscapes, with passionate pleas for a better approach to coal mining.

Especially interesting are the film's theological undertones. An early scene depicts a ... 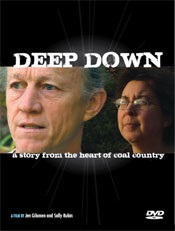