A romantic comedy about the kooky world of morning news shows.
Camerin Courtney|November 10, 2010
Our Rating

Morning Glory, like its female lead Rachel McAdams, has gobs of potential. It's directed by Roger Michell (Notting Hill), written by Aline Brosh McKenna (The Devil Wears Prada), and produced J.J. Abrams (Lost, Alias). And the cast! The adorably likable McAdams and Diane Keaton. The delightfully snarky Harrison Ford and Jeff Goldblum. And it's about TV morning shows. You know, those "news magazines" that tell you about the latest terrorist attack one minute and then help you whip up a tasty shrimp tempura the next. So. Much. Fodder.

But sadly, this impressive collection doesn't dazzle quite like it should.

It starts out well enough—like the first hour of any respectable morning show. We see Becky Fuller (McAdams), our workaholic leading lady, bungling her way through what we can only image is just one of countless awkward dates she's been on. Next scene we see her alarm waking her at 1:30 a.m., so she can get to work for her job as a producer for Good Morning, New Jersey. Becky is clearly in her element here—chatting up her coworkers, deftly waking up an anchor who has fallen asleep on air.

Becky and her colleagues think she's a shoe-in for a promotion. But poor Becky gets blindsided by a layoff. No worries. This woman, pluck personified, buckles down and works her contacts, finally willing herself into a job at Daybreak, the last-place morning news show in New York City with a worn-out studio, budget, and cast.

In this new gig, she inherits Colleen Peck (Keaton), a former beauty queen who presides over the show with almost-believable aw-shucks charm, as well as a dorky but lovable weather man and a hot fashionista who has a slew of fruity story ideas and just as many made-up words in her vocabulary. Becky fires ... 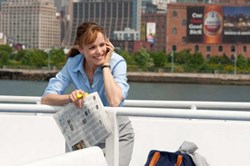