Conviction comes with the tagline that it is based on an "incredible true story." Not all great stories make for great movies though.

The true story, which is pretty incredible, belongs to Betty Anne Waters and her brother Kenny. When Kenny was convicted of murder, Betty resolved to put herself through law school in order to take up his case and, ultimately, appeal his conviction. This process takes years, because Betty had to first earn her GED and then make it through undergraduate education, which she did while working primarily as a waitress.

The pitch sounds like a "can't miss" movie, and Minnie Driver, Juliette Lewis, and Melissa Leo combine with Swank and Rockwell to give the film a cast that is truly impressive. That the film is not more engaging can be attributed to two script and direction problems.

First, television dramas aside, the legal process is not inherently dramatic. A trial has moments of drama, yes, but Conviction is not really a courtroom drama. The bulk of Betty Anne's legal work that is shown in the film involves talking to people on the phone and visiting her brother in prison. That the most dramatic moment in the film comes off camera and that we learn about it after the fact rather than see it may be a testament to the film's verisimilitude, but it may also leave audiences wanting a drama rather than a civics lesson feeling a bit cheated.

The bigger problem with filming this narrative, though, is structural. Contemporary narrative film as a temporal, visual medium is good at showing action, immediacy, and consequence. It is generally less successful at capturing faithfulness, constancy, or persistence—qualities that demonstrate themselves, and grow in scope and meaning, over long passages of ... 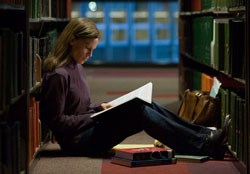