Documentary calls for end to Obama's "socialism" and a change in Congress.
Mark Moring|October 15, 2010
Our Rating

Ray Griggs, a conservative Christian filmmaker, releases a new documentary today to 500 theaters. Its title is I Want Your Money, but the message is more like "I Want Your Votes"—for a Republican overhaul of Congress in the upcoming midterm elections. To Griggs, the logic, and thus his call, is simple enough: The Obama administration is spending way too much way too fast, and the only way to stop the runaway train of fiscal irresponsibility is to vote in a new crop of thrifty politicians on Nov. 2.

Actually, Griggs would probably like to take things one impossible step further: He'd like to resurrect Ronald Reagan and put the Gipper back in the White House. Griggs makes liberal (oh, the irony of that adjective!) use of Reagan speeches, footage, and soundbites to make his main point: What Griggs perceives as an out-of-control, tax-and-spend government run amok, he believes can only be fixed by a return to Reaganomics—reduced taxes for everyone, drastically curtailed federal spending, and the rest, voila, will take care of itself, just as it did in the 1980s.

The Reagan-vs.-Obama motif so pervades the film that it's literally depicted—via sometimes cheesy, sometimes humorous CGI animated caricatures—three or four times throughout. The first time shows Reagan entering the current day Oval Office to give Obama a lesson in economics. Reagan offers the President jelly beans as an object lesson; Obama declines … then lights up a cigarette while the Gipper gives his fiscal lecture.

The final meeting between the two presidents—you won't believe this—occurs in the boxing ring, with a flabby old Reagan still trying to give the much younger, much fitter Obama more nuggets of financial wisdom. ... 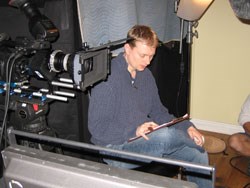