Despite a promising premise and strong leads, this rom-com falls short.
Frederica Mathewes-GreenOctober 8, 2010
Our Rating

How bad can a blind date be? When Eric Messer ("Call me Messer") shows up an hour late at Holly Berenson's apartment, invites her to climb onto his motorcycle in a sheath dress and high heels, then answers his phone and makes a date for later ("11:00"—a glance at Holly—"no, 10:30"), it could hardly be worse.

Who thought these two would mesh? Pete Novack, Messer's best friend from high school, and Alison, Holly's best friend from college. After the disastrous date, we see a montage of home-movie clips of Pete and Alison's life—wedding, dinners, parties, and baby Sophie's first birthday—with Messer and Holly eternally sparring in the background.

Then the unthinkable happens: Alison and Pete are killed in a car accident. Messer and Holly are in for another shock, though. In their will, Alison and Pete named them, jointly, the caretakers for Sophie. They can live in the Novacks' big, beautiful house, to keep Sophie in the home she has always known. It doesn't matter that they have never been in charge of a baby before, or that they can't stand the sight of each other. From now on, they will be Sophie's substitute mom and dad.

It's not a bad premise, and it looks like a good way to kickstart an old-fashioned screwball comedy, the kind in which the romantic leads bristle with conflicts right up to the moment they fall into each others' arms. And, because it involves a baby, there are opportunities for gross-out humor (baby throws up in Messer's face, spits food in Holly's face, and bestows an overwhelming diaper on the couple) that will make the film more bearable to viewers who don't particularly like love stories.

As in any good screwball comedy, the central couple is surrounded by quirky, fun-to-watch characters. ... 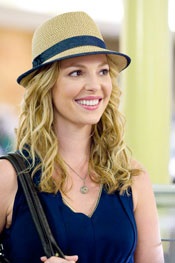