While it's easy for me to criticize modern worship, I also criticize my own criticisms, based on what I observed at David Crowder's church music conference.
W. David O. Taylor|October 8, 2010

You know you are at a worship conference sponsored by David Crowder when a fog machine kicks in and gobo lights wash the stage in color while the Welcome Wagon sings an exquisitely spare version of "Hail to the Lord's Anointed." It makes you wonder what the Moravian James Montgomery (1771-1854), author of the hymn, would have thought.

This past weekend I had the privilege of attending Crowder's Fantastical Church Music Conference in Waco, Texas. Presenters included folks like Louie Giglio and Francis Chan. The songwriters spanned a broad range of musical styles: from the "liturgical" BiFrost Arts group to the R&B sounds of Israel Houghton, from the hard rock tones of Gungor and Paper Route to the minimalist soundscape of The Civil Wars. Never heard of them? Mostly neither had I. 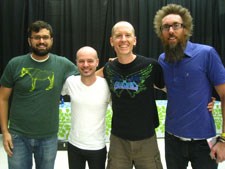 I had, however, heard of Charlie Peacock and Matt Redman, second and third generation songwriters of contemporary worship music respectively. I had seen Derek Webb the "firebrand" live in 1993. I had watched Jars of Clay on David Letterman in 1996. I knew many at Duke Divinity School did not think highly of Hillsong music. I knew Rob Bell was persona non grata in certain Reformed circles. And I knew that this lyric might cause near cosmic eye-rolling: "So heaven meets earth like a sloppy wet kiss," courtesy of North Carolinian songwriter John Mark McMillan. Oh, the sentimentalism of it. Did it have to be sloppy? Could it not be transcendently circumspect?

For the two thousand of us in attendance, one question occupied our minds: What do all these musicians have to do with each other? The easy answer is nothing. According to David Crowder, however, much. For me the conference represented an exercise in subversive hopefulness.

But since it's more fun to criticize, I'd like to share four things that rubbed me the wrong way. In fact I'm going to do what annoys me: impulsively react. I'm going to criticize, then criticize my criticism. Why? For two reasons: one, I too frequently find critiques of contemporary worship music to be lazy, and two, I left the conference feeling very encouraged. Did that surprise me? Sure. But that only tells you something about my little faith.

In the book of Galatians, St. Paul rebukes the "foolish" believers for looking to circumcision as a way to establish an identity marker over against outsiders. He tells them that the only identity marker that matters is the presence of the Spirit. Looking around the Green Room at the conference, I saw lots of skinny jeans. I saw baroque tattoos trailing down people's arms, funny hats and thin mustaches, raggedy hair and fussy glasses and a handful of scowls. I thought, "This is so goofy. Skinny jeans are goofy. It's just a way for artists to be cool, which is another way for them to be not like normal people. And what's up with wearing funny hats when you lead us in worship? All that does is to draw attention to yourself."

Then I thought, a suit and tie is goofy. So too are liturgical robes. At one level they symbolize a theological and spiritual posture before God. They matter, yes. But at another level they represent cultural ideas of what is appropriate, and therefore to those outside the given culture they seem "goofy." The suit and tie appears as a 17th century invention, while ecclesiastical robes exist as leftovers of late Roman culture. So why should skinny jeans be intrinsically inappropriate? They are not. In fact, once I imagined the "alternative" crowd that Michael Gungor leads into worship in Denver, Colorado, I got over my bad attitude and gratefully received his hymns.

2. All this I-me-mine-my music will give you indigestion of the soul!

Yes. It will. There was a lot of it, I confess. The bounty of "I live for you" and "I'm gonna give my praise to you" songs kept reminding me that me, myself and I were engaged in something terribly important right then. After a while, as my grandma might say, I plum wore out. I got tired of me. But for those of us who allergically react to the wealth of I-songs, we need to remember that the Psalter includes a surplus of first-person singular prayers. There's the simple Psalm 18:1: "I love you, Lord, my strength." There's the emotive poetry of Psalm 38:9: "All my longings lie open before you, Lord." Say that phrase too loudly in a worship assembly, and we might feel uncomfortable. For many of these songwriters, however, it is anything but that. The Psalter's language, to their mind, rightly gives voice to the heart's response before the throne of grace.

Something these songwriters might want to note, though, is that, far from denying the role of first-person prayer, the Psalter sets these prayers within a corporate context and in this way protects the congregation from sinking into a distorting subjectivism. The British theologian David Ford explains the Psalter's dynamic well. He observes, "The Psalmist's 'I' accommodates a vast congregation of individuals and groups down the centuries around the world today. It amounts to an extraordinarily capacious and hospitable 'I'." So while it's good for me to sing my song to God, it's also good for me to sing our song to God. 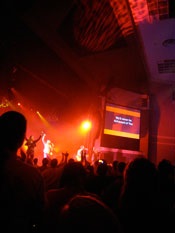 Exhibit A: Check out this video clip of the conference host and his band.

In an e-mail prior to the conference, Crowder shared with me a concern about rock music. He asked, "Is the pop-rock song 'disposable', as many suggest, and if so, what does that mean about basing our congregational singing on such a thing?" One might ask the same thing about the pop-rock musician. Does the stage-centric, unidirectional, heroic-leader, "passive"-audience, shout-fest, heart-on-the-sleeves culture of pop-rock music militate against healthy worship practices? Maybe. But not necessarily.

In conversation with the songwriters who attended the conference, I discovered a great deal of humility. Matt Redman said to me, as we walked across the campus, "I ask theologians for help with my music because I'm scared. I'm putting words in people's mouths. I'll be judged for that!" John Mark McMillan acknowledged: "As songwriters we need to expand our vocabulary so we can say things carefully." Both Derek Webb and Dan Haseltine (of Jars of Clay) readily confessed to me that they had made mistakes in their earlier years. They recognized a constant need for their pastors to speak into their lives. It might be easy, then, from a distance at least, to dismiss these musicians as "egocentric rockstars," but up close I found a group of songwriters who earnestly wrestle with their responsibility as servants of the church.

On Friday morning Rob Bell challenged his audience to drop "blood guilt" and "three-tiered universe" metaphors in their songwriting. He said we needed metaphors that connected to people today. Plenty of people in North America, he said, feel an aching sense of loss of home and we need songs that offer Christ as their true home. On Friday night Louie Giglio thundered: "Worship is what awake people do. Are you alive? I don't care what denomination you go to. All that matters is, Are you alive?"

As I listened to both of these men, it dawned on me that I was watching evangelicalism unfold before me. On the one hand, you had Bell the prophetic voice calling the church to contextualize its faith. On the other hand, you had Giglio the preacher calling the believer to conversion again. If you throw a David Crowder into the Louie Giglio mix, you get the latest iteration of evangelical history: Wesley and Wesley, Moody and Sankey, Graham and Barrows, Giglio and Crowder. You get a classic pattern of preacher and musician, working together to bring the church to a renewed encounter with the living God.

In the end: Who sings and why does that matter?

David Crowder posed a question to all of us at the fantastical conference: Why do we sing? I wonder if the question might rather be, Who sings and why does that matter? We know from the book of Hebrews that Christ is the true worshiper. By the Spirit he sings his true song in us and presents all our worship as pleasing before the Father. David Dark on the final morning said, "Right worship is a communal undertaking, responding to God's song." I liked that. It was a helpful reminder that the Body of Christ not only sings together but learns how to sing together. 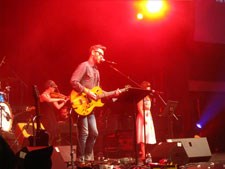 Mike Crawford and His Secret Siblings

The temptation at a conference like this is to be cynical and judgmental. Cynicism says these people are phony. Judgmentalism says these people are doing it wrongly. But I beg to differ. I found a lot of songwriters who humbly seek to provide the church with good worship music. If I had a wish, it would be this: that pastors and theologians would want to come alongside these songwriters, in mutual submission, to discover together music—even rock music—that enabled the church to worship, as skinny-jeaned, raggedy-haired songwriter Mike Crawford might say, with "words to build a life on."

W. David O. Taylor, a doctoral student in theology at Duke Divinity School, is author of For the Beauty of the Church: Casting a Vision for the Arts (Baker). He blogs here, and has also written four essays on contemporary worship.