Comedian Michael Jr. is taking his routine to those who most need to laugh—the down and out, the lost and lonely.
Mark Moring|September 1, 2010

Comedian Michael Jr. has done a lot of gigs in a lot of places, everything from hole-in-the-wall comedy clubs to The Tonight Show, Comedy Central, and Jimmy Kimmel Live. Oh, and lots of churches. As a Christian, he sums up his modus operandi like this: "If I'm in a club, my material has to be clean enough to work in a church. If I'm in a pulpit, it has to be funny enough to work in a club." 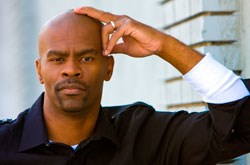 Like anybody in his line of work, Michael Jr. wants to make you laugh. For years, that was his main professional goal. But not long ago, one gig in an upscale California club changed his way of thinking.

"I was praying before that show," he says, "and God sort of changed my mindset. I went from wanting to get laughter from people to wanting to give people the opportunity to laugh." After that same show, while hanging and laughing with some fans on the sidewalk out front, Michael Jr. saw a homeless man across the street—his in a neighborhood where that's a rare sight. They made eye contact.

Michael Jr. says he asked himself, "How could I take comedy to him? What would that look like?"

What it looks like is what he did in the ensuing months, taking his routine to a youth prison in California, abused children in Colorado, a homeless shelter in Los Angeles, and those suffering with HIV/AIDS in Fort Worth, Texas. All of it was recorded for a new documentary, Comedy: The Road Less Traveled, which will screen in churches this fall before becoming available for general DVD sales after that.

For Michael Jr., the experience so powerful that he has worked such events into his regular schedule; he seizes every opportunity to take his comedy to these groups, which usually include people who need to laugh more than anyone. Such gigs don't pay well, if at all; Michael Jr. sometimes even pays his own expenses to go to these places.

Christianity Today recently chatted with the comedian about the film, his work, and Christians' sense of humor. (Click here and here to see a couple of his jokes.)

You took your comedy routine to some places where people are really hurting. Tell a story or two that stands out from this experience.

At the youth prison, one of the guys said, "When Michael Jr. made us laugh like that, he made us feel more human." I was blown away by that, because I never thought they were anything but human.

At the Union Mission in LA [a homeless shelter], there was a meth addict on the front row. I remember him laughing really hard, hardcore belly laughter. I got a hug from him afterward, a hug like I'd never gotten before—like he was feeling some kind of release. When somebody in bondage starts to laugh, it's like overcoming the devil. He didn't say anything at the time, but when I saw him some months later, he had completely gone straight. He said that that [comedy routine] was the day everything changed for him. He said, "I am free," and said he's now a youth pastor down there. I was amazed.

And there was another guy down in Fort Worth at the HIV facility who said he hadn't laughed in over 20 years. Can you imagine that? Twenty years.

Are you funny in person, or just on stage?

I'm not that funny in person. If I was at a party, I'd be off to the side, usually just watching people. My comedy is mostly just observational humor. I observe what people do, and talk about it in a funny way. It's sort of a different kind of humor.

Actually it's really easy. Jokes just come to me, and I write them down. I send them out on Twitter and get some responses, and I kind of know before I go on stage what's going to be funny or not. It's just part of a gift or anointing, I guess. This may sound weird, like I think I know too much, but I just know what's going to be funny. I may have to adjust my routine about where a certain joke goes in the set. It's all about placement; it's very strategic. But I'm pretty good at looking at the audience and knowing what materials will be appropriate. Also, I don't really care that much about their reaction.

Let me explain. Comedians are looking for some kind of acceptance, but that's not the way it is with me. I know God has accepted me, so I don't really need the acceptance of the audience laughing and applauding. If you are of the mindset that I've gotta get laughter from people, and then people aren't laughing, it's hard to go on. 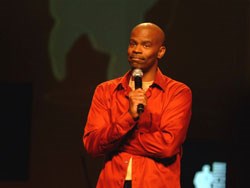 The comedian finds his acceptance in God

When I did my comedy in the youth prison, for a long time the guys just weren't laughing. But I know that I have the goods; it was just a matter of what they're going through. I have to be okay with it, even if they don't laugh. And even if only one person laughs, at least they were in a room where one person laughed, as opposed to just being in a place where nobody's laughing but they're always fighting. There's no way I could do this if I still need their acceptance, like an average comedian does. If I didn't know that God says I am fearfully and wonderfully made, these shows would be really, really hard.

All comedians bomb at some time. You've gotten over that?

Yeah. This is what I tell young comedians who are starting out: "You have to be willing to fall on your face." Especially if you're doing this with a kingdom heart. Because you never know what one person you might touch. There could be somebody in the audience who is thinking about committing suicide. Then you get on stage and you bomb, or something really embarrassing happens—you're just horrible. Well, that person sees what happened to you and they're like, Well, maybe life isn't so bad. I could live on. I mean, you have no idea how you are being used in that moment. And because you don't know, you just roll with the punches.

Are Christians a tougher audience than a typical comedy club?

They kind of balance out. In a comedy club, they're used to hearing a lot of bad language, a lot of sexual content. And if you're not doing that, then you really gotta bring the heat—and they're a little disappointed that you're not [being crass]. But then they start to pay attention to the funny parts, and then it's great. You end up at the level you wanted to be anyway. At a church, they are so afraid you're going to say some curse words or something, that they're cautious the whole time. Then they finally realize you're not going to curse, and then they are okay. So it kind of balances each other out.

I never write any material based on any particular audience. I simply write it based on what I think will be funny and what comes out of my heart. If I stay in the Word, if I continue to praise and worship, I believe that the jokes will represent [God and my faith] in a big way.

Are there some jokes that bomb in churches?

If God doesn't speak to me and say, hey don't do it, I'll do it. But take breastfeeding. Oh my gosh. In some churches, somebody will say, "He shouldn't do the joke about breastfeeding." Goodness, breastfeeding is 100 percent natural! But this is the thing: If somebody says something, I'll pray about it and seek some clarity. But sometimes there are just a few Pharisees in the audience who wanna trip you up. Now it's to the point where I kind of set up those people; I'll do some jokes they may think are a little on edge, because they need to stretch out anyway. I let them judge me for a while, but then they realize, He's working for the Lord? Oh, okay. You can just see it happen.

I just purpose to bring the funny and not get caught up in everything. I mean, if you do a show and everybody loves it and everybody agrees with everything you said, you did something wrong.

I believe your show should challenge people on some level. When I write comedy, I write so 97 percent of the audience will get the joke, but maybe 3 percent won't. The joke needs to be written clever enough where some people are just laughing off faith from the last joke, or because people around them are laughing—as opposed to everybody getting it. It needs to be written very smart.

Do you think Christians are good at laughing at themselves?

I just look forward to representing the kingdom the best that I can. It's not going to be pretty every time to everybody, but I'm just going to do it, at the risk of sounding like a Nike commercial. There are a lot of people out there hurting, who need to laugh. But there are also a lot of people who care, and I want to be part of multiplying that.

1 of 2
Michael Jr.The comedian finds his acceptance in God