A gripping thriller about the destructive power of hidden truth.
Alissa Wilkinson|August 31, 2011
Our Rating

Everyone has secrets they want to keep locked away—some darker than others. Many people's secrets go with them to the grave. But what if your secret put others in their graves and might come back to haunt you?

In 1966, Mossad (the Israeli intelligence organization) secret agents Rachel (Jessica Chastain), David (Sam Worthington), and Stephan (Marton Csokas)—previously strangers to one another—are tasked with one goal: to locate and capture Nazi war criminal Dieter Vogel and bring him to trial. Vogel is the famed and feared "Surgeon of Birkenau," who sent thousands of Jews to their deaths at the Auschwitz-Birkenau camp during the Holocaust. And now, justice calls.

Vogel is found practicing medicine in East Berlin, and Rachel will act as bait, confirming his identity and putting the plan in motion. While they train and wait for the right moment, they live together in a dingy apartment, bent under tremendous stress and anticipation of the work they're about to do. The fateful day arrives, and the agents capture Vogel, but something goes horribly wrong, and they are suddenly locked into a harrowing tailspin that ends in a dark secret they must keep.

More than thirty years later, in 1997, Rachel (Helen Mirren) and Stephan (Tom Wilkinson)—now retired and divorced from one another, having married after their time in Berlin—are in Tel Aviv for the celebration of the publication of their daughter's book about their experience. Suddenly, shocking news arrives: David (Ciaran Hinds), who they have barely seen in the prior three decades, has killed himself, and it looks as if their secret is about to be revealed. Panicking, they must once again face the truth they had locked away and pay the debt they still ... 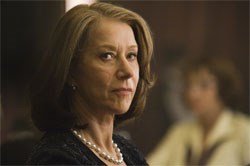